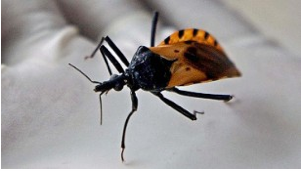 The Kissing Bug, which spreads the Chagas disease, is located in Central and South America, it can even be found in 25 of the 50 states of the United States. Chagas disease is considered mild and even asymptomatic, where a person doesn’t even show signs of symptoms, but the disease is showing links to deaths that are fueled by this infection.

The Kissing Bug spreads the Chagas disease by biting the lip or face of a human while they are sleeping. Then after they have bitten them, they defecate into the wound, which is where the infectious parasite Trypanasoma cruzi is located. Then this parasite enters the bloodstream and that is where the problems start.

Since Chagas disease is a mild disease, many people, especially in Central and South America, do not get treated, for which the parasite stays in the blood stream and can cause problems later. In a study published by PLOS Neglected Tropical Disease, Chagas disease can increase the risk of death by two to three times in any age group. Another problem besides not getting treated, is that is it very hard to detect, especially in Central and South America, one of the only ways people find out that they have this disease is through donating blood.

Now some of the reasons for death caused by this infection was heart disease, the leading cause, where people with this infection have 17 times more of a risk of getting cardiovascular disease. There are over 6 million cases of Chagas, with 300,000 people in the United States. There is still no vaccine, and there is treatment for those right after infection, but they are still trying to stop the spread of the Chagas disease.