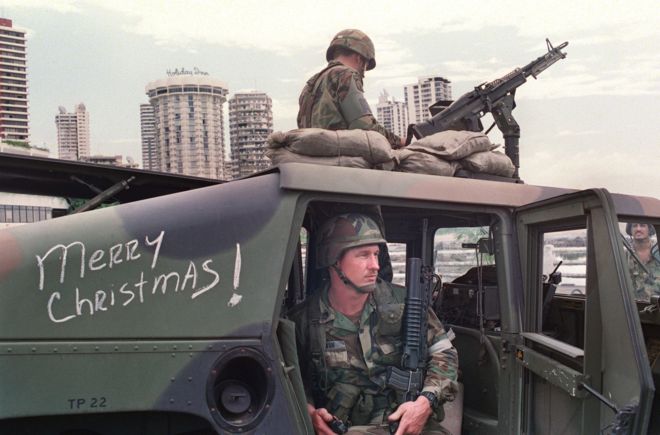 From 1983 to 1989 the recently deceased at age 83, Manuel Noriega was the leader of the Panamanian Army, later to become a military dictator of Panama. Before he was put into power Noriega was placed on the pay roll of the United States C.I.A, his job was to provide intelligence to the US about what was going in Central America. He told the CIA about radical terrorist groups that were working out of Panama.

At the end of 1989 President Bush invaded Panama, this was the largest military movement of US troops since the Vietnam war.  28,000 troops were moved in around Christmas time to oust the power out of Noriega.

Manuel Noriega went into hiding as soon as he knew they were coming, he went to the Vatican’s embassy for cover.  Soon after the embassy was surrounded and 10 days passed before they good get him out.

Instead of using firearms, US Troops rolled up in humvees with concert grade speakers mounted to them to use music to blast Noriega out of the building.  The songs were on repeat being placed over a military radio station. The songs that were claimed to be played were Heavy metal songs like Enter Sandman by Metalica.

They played some noises as well, the sound effect that eventually broke him was babies crying. that doesn’t sound like much but when it’s playing extremely loud non-stop for 10 days it will drive anyone insane.