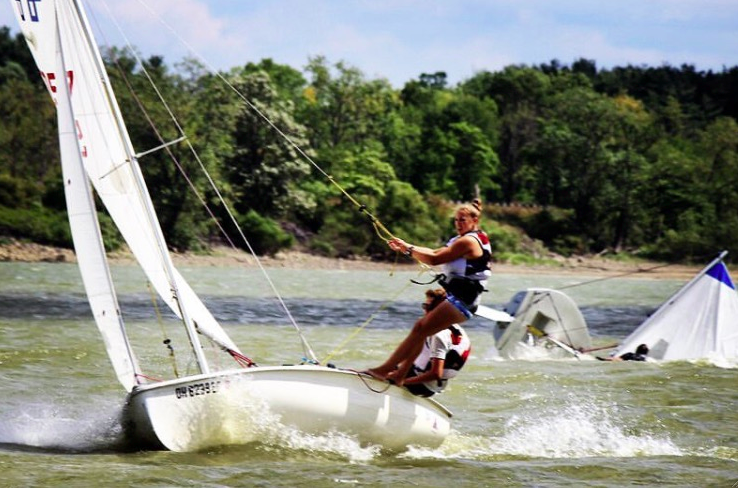 About 70% of the human body is made up of water, and yet most of us never venture past the shore. To be a master of wind shift, a warrior against ever-changing weather conditions and a human rolodex of knots is the easy part about being a Club 420 sailor. Well, what exactly is a Club 420? A two-person boat completely controlled by 2 sails and a flat piece of wood used to steer. That doesn’t sound like much, but the rush of sailing one just might hook you in for life.

Lakewood High School sailor Luke Healy has been mastering the craft since he was 8, starting out on a more simple, single person boat called an Opti. In between traveling to  Pennsylvania, Columbus and Michigan for regattas, Healy attends Lakewood High and is a sought after skipper (driver) at the Edgewater Yacht Club. He skippers the Club 420 (video example below) as well as crewing for big ships during summertime festivals in the Atlantic Ocean. He dedicates about 20 hours a week to sailing, which is a similar commitment to a part-time job for a teenager. Healy also teaches sail camp in the summertime and is one of the co-founders of the Lakewood High School Sailing Team alongside junior Stephanie Posedel.

The sailing team here at school is run through the Foundry, which is a fairly new sailing and rowing facility out of the old Coast Guard station. The view alone from the station is breathtaking, but the real thrill is boarding a C420 and carving up the waves. New sailors are always welcome to join in on the fun and weekend regattas, no experience required! However, this sport isn’t for a leisurely lifestyle; sailors have 3 practices during the week and races nearly every Saturday. Every sailor must gather up their courage and put on nearly a thousand dollars in gear to brave the wind and waves. Luckily, new sailors are always greeted with open arms and wet suits to borrow.