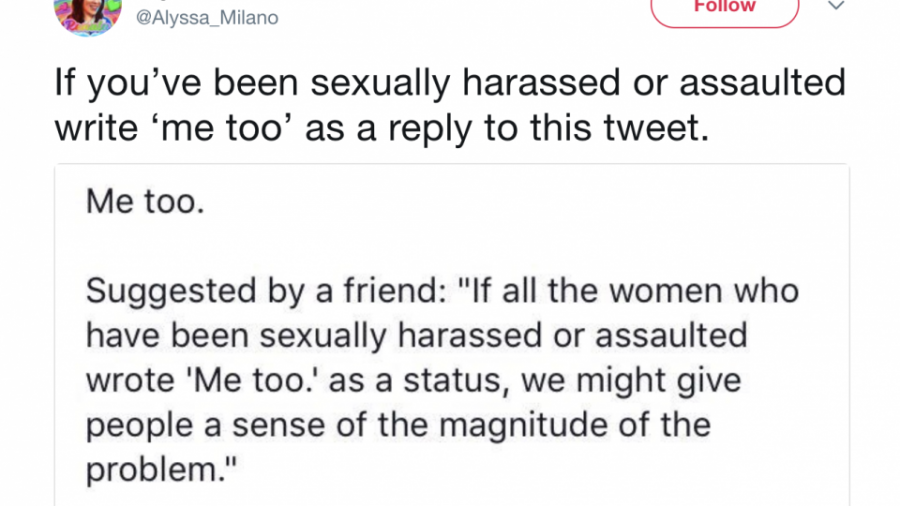 The exposure of sexual assault happens as a domino effect–many containing their traumatic experiences, only speaking out of influence of another victim. Two simple words “Me Too” quickly became an outcry on Twitter as people chose to stand against sexual assault and harassment. On Sunday, October 15th, actress Alyssa Milano sent Twitter into a frenzy tweeting, “If you’ve ever been sexually harassed or assaulted hashtag ‘me too’ as a reply to this tweet.”

The staggering amount of 6,000 replies, the hashtag gives a sense of magnitude to the problem at hand. The trend accumulated directly in response to the recent exposure of Harevy Weinstein’s alleged history of sexual assault toward women of spanning decades. Among the victims are renown actresses such as Angelina Jolie, Gwyneth Paltrow, Meryl Streep. The list continues to grow day by day. So far, thirteen women have detailed their traumatic experiences with Weinstein that each have–showing his pattern of assault. Each story is aligned with similarity by describing the same situation. The assault have all been hotel room incidents by which the movie producer places the actresses in a vulnerable position–promising fame and threatening to end jobs in exchange for sexual favor.

“I felt like I had to,” states Asia Argeto, who was repeatedly assaulted by Weinstein. The actress was invited what she believed was a Miramax party, but ended up alone in an empty hotel room with the producer who appeared naked and went on to forcibly perform oral sex. Argeto’s report vividly mirrors that of three other actresses–the number only increasing as his victims begin to voice their encounters.

The movement of “Me Too” is explained by Milano who states, “While I a sickened and angered over the disturbing accusations of Weinstein’s sexual predation, I am happy that is has opened up a dialogue around the continued sexual harassment and degradation of women.” Sexual assault victims all around the world thank Milano for her ability to provide awareness on the growing issue at hand. Victims are using the tweet as a medium of outlet of the stories that have accumulated with no source report due to fear. Now that the tweet has accounted for the thousands of victims that have been remaining silent..the questions stands: What next?