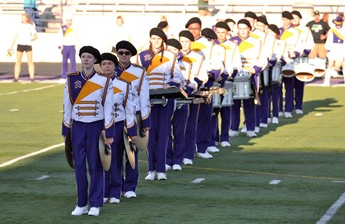 Last week marked the last football game, and with it the last marching band show. The week before that was senior night, and the halftime show consisted of one song from each of the senior’s four years here. Over the course of the football season, the band played 2 different shows (one Green Day and one Elton John), which was impressive because they do not practice everyday (like most other bands that are a class as well as an extra-curricular). As well as the 2 shows, they also played other individual songs like Crocodile Rock (for Alumni night) and Shut Up and Dance (for 8th grade band night). This season, the band also performed at three band festivals: one at the Lakewood Stadium, one at Parma, and one at Ohio State University.

Although the majority of the season is over, there are still a few things left to perform. This Friday evening is their concert, where they will play every single song they played this season. If you come to the concert, you can buy a CD recording of it. At Veteran’s day next week the band plays at Lakewood park during the school day. Later in December, they will march in the Light-Up Lakewood parade. After that, the only thing left is the marching band lock-in, which happens at the Y in eaApril.

This season was one of the best in band history, especially because the senior show was put together and organized on time. Hopefully, next year will be just as great.