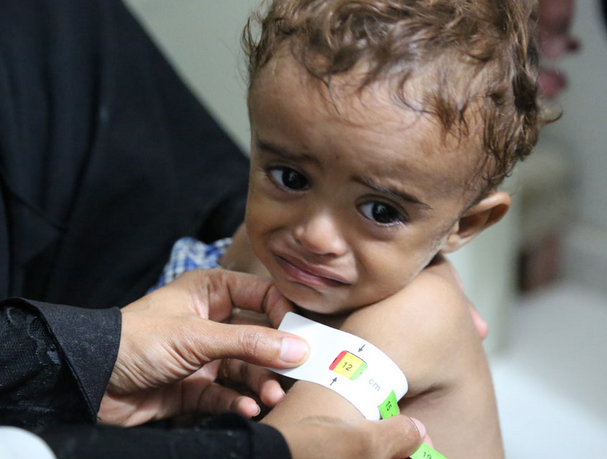 With all the tragedy surrounding the United States, it can be hard to see past ourselves into the world. Unfortunately, when one looks past our own difficulties, we see that the world is struggling too. A famine in Yemen was brought first to my attention.

A series of terrible political events and missiles shot off by rebels from somewhere in Yemen, have cause Saudi Arabia to completely blockade Yemen by land, air and sea. An outbreak of cholera had afflicted almost 900,000 in this past year alone and adds to the crisis. Families in Yemen struggle to feed their children due to a shaky economy, medical bills through the roof and no import of goods. Considering Yemen is almost completely reliant on other countries for food and resources, this lack of food coupled with a plague of cholera (which has infected much of the food and water that is left) is predicted to send this war-torn country into a famine killing millions.

The UN’s humanitarian support has been halted as no shipments of food or support have been allowed in. Not only food and clean water are being brought in, but vaccines to the cholera outbreak. This deadly mix of lack of vaccine and imported food is causing both a famine and an unstoppable epidemic of cholera which is projected to kill more than 7 million Yemen. Is this genocide? Or simply a country caught in the cross-hairs of a heated political debate lasting generations? Who knows at this point. What we do know, however, is that the citizens of Yemen are innocent and need our help. Unfortunately, the US has been supplying Saudi Arabia with weaponry and supplies to force the blockade on Yemen. They need our help.

Please send concerns to the UN representative, Nikki Haley, through this forum.