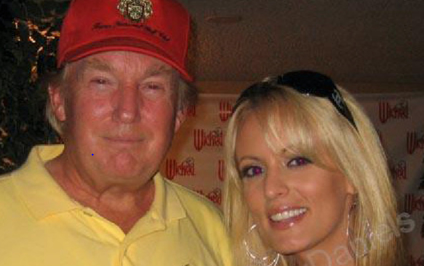 A recent In Touch Magazine interview with adult film actress, Stormy Daniels, revealed a scandalous affair with Donald Trump in 2006–a year after he married Melania Trump, four months after the birth of their son.  The interview remained unpublished until January 17th, when rumors of the affair resurfaced. According to the Wall Street Journal, Trump’s Lawyer, Michael Cohen, paid the actress $130,000 as hush money just a month prior to his election.

Stormy Daniels, whos legal name is Stephanie Clifford, revealed scandalous details about her affair with the President-alleging sexual trysts with Trump at a celebrity golf tournament in Lake Tahoe.

“I actually don’t remember why I did it but I do remember thinking ‘Please don’t try and pay me,'” Daniels recalls. He proceeded to tell her she was “someone to be reckoned with, beautiful and smart just like his daughter.”

She proceeded to evade him questions about Melania, to which he replied, “Oh, don’t worry about her.”

Since the rumors have resurfaced, Cohen and the White House denied the allegations of any agreement aimed at keeping her silent.

In a related story, Alana Evans, also an adult film actress and friend of Daniels, told NBC that Trump invited her to join him and Daniels for a “party” in his Lake Tahoe hotel room. She turned down the invitation but had an idea of what kind of “party” the pair had in mind. Evans added that Daniels told her the next morning how the evening unfolded.

In Daniel’s final remark, she admits, “We had a really good banter,” when recalling the ongoing affair.