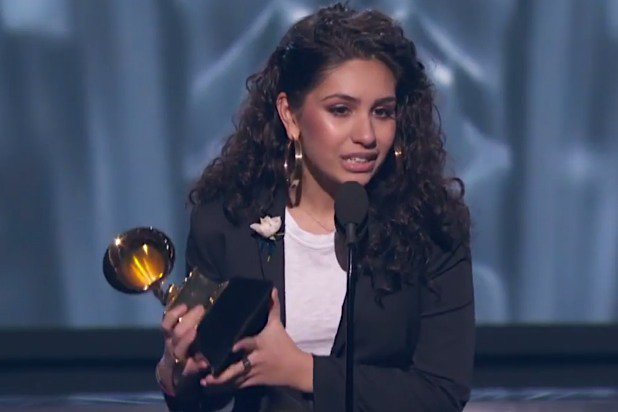 The 60th Grammy Awards took place on Sunday, January 28, showcasing an array of talent from across the music industry. Performers included Kesha, Miley Cyrus, P!nk, Elton John, U2, Sam Smith, Lady Gaga, Logic, DJ Khaled, Luis Fonsi and Daddy Yankee, Childish Gambino, SZA, Kendrick Lamar, and more. Although the female-to-male ratio of performers was fairly even, the same cannot be said for the winners of the Grammys themselves.

Leading the show was Bruno Mars, who won a total of six Grammys, according to the Guardian.  These incredible awards included those for album, record and song of the year. The New York Times also reports that Kendrick Lamar won a majority of the rap awards, and Ed Sheeran won best pop solo performance and best pop vocal album, while a majority of male-dominated groups and soloists swept other categories.

Who were the winning women of the night? Alessia Cara, known for “Stay” and “Scars to Your Beautiful,” was awarded best new artist, and Rihanna and Cardi B had a few features in a couple of the men’s songs. Little Big Town, with a female lead vocalist, also won for best country group performance, and a number of other women received Grammys for categories in the folk, Latin pop, and gospel genres.

Clearly, the ladies did not win as many awards as the men, which on the outset is not such a bad thing- perhaps the men simply did better this year. However, when taking a closer look at the songs that won versus those that did not, it is evident that more women deserved awards for their work, sparking #grammyssomale on Twitter.

“I got a condo in Manhattan/Baby girl what’s hatnin’?/You and your *ss invited/So gon’ and get to clappin’.” These are the opening lines of Bruno Mars’ “That’s What I Like,” the tune that won song of the year. Though less degrading, Ed Sheeran’s song “Shape of You,” which won best pop solo performance, also contains lyrics such as “I’m in love with your body” and “Grab on my waist and put that body on me.”

Kesha’s song “Praying” lost to Sheeran’s in the same category. She wrote the song amidst a legal battle with her producer, who allegedly physically and emotionally abused the singer, evident in lines such as, “Told me I was nothing without you/ Oh, but after everything you’ve done/I can thank you for how strong I’ve become.” “Praying” was performed at the Grammys by Kesha, along with an array of other female vocalists, such as Cyndi Lauper, clad in white to show their support for victims of sexual misconduct.

We can only wonder why Kesha’s song was not recognized on the same level as others, especially during this time of #metoo Tweets, the exposure of Hollywood’s sexual assault, and the rising power of women. But, hey, at least those “You and your *ass invited/So gon’ and get to clappin'” lyrics one an award, right?

Overall, women were incredibly let down at this year’s Grammy show, setting back our society’s path towards complete gender equality. Let us hope that the Oscars and other award shows do a better job of representing the female-empowering essence of this era.