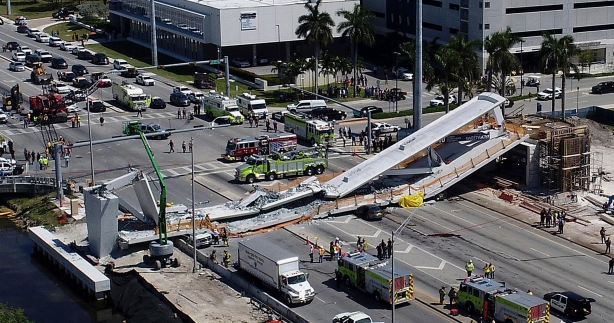 On the afternoon of March 15, a bridge in Miami, Florida collapsed upon eight cars below, killing at least six people and injuring a handful as well, reports the Washington Post. This news comes less than a week after the bridge was completed on March 10.

The pedestrian bridge, which connected Florida International University to the town of Sweetwater, fell at about 1:30 in the afternoon. Soon after, over 100 firefighters rushed to the scene, where the responders as well as search dogs and cameras would examine the perimeter for hours.

According to Time, the 950 ton bridge cost $14.2 million to build, and was intended to help students travel safely between the school’s campus and the city. It was not yet open to the public at the time of the collapse, seeing as two workers were doing a “stress test” when the structure fell. It is possible that the cables were pulled too tight, which can lead to what occurred on Thursday, says the Herald.

The bridge was supposed to be “the first of its kind,” especially because of the way it was placed upon supports– by being lifted and rotated. The structure was built by Munilla Construction and FIGG, both of which have issued apology statements. The two companies have also been fined in the past for safety issues.

There may be other vehicles beneath the rubble of concrete, but safely uncovering them is a long and dangerous task. Investigators also have yet to confirm the exact cause of the collapse, says the New York Post, but engineers and homicide investigators have been working in tandem to uncover the truths of the tragedy.