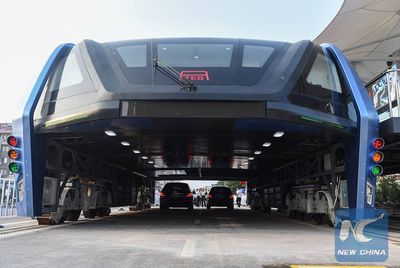 China has the highest population of any other country and that means that transportation is a problem and in the major cities rush hour is like hell. As of recent a private company has been making something called Transit Elevated Bus, it is a huge bus that allows cars to pass underneath it. The wheels stretch from one side of the road to another on a two lane road, it also can hold 300 people in it at a time.

The bus is electric and can go up to 40 miles per hour. It’s 72 x 25 x 16 making it very big, 28,800 cubic feet to be exact. The government has been hesitant on releasing it in Shanghai or Beijing because they don’t know what could happen during the worst of rush hour. So they’ve been running in Qinhuangdao, in the province of Hebei just west of the Korean peninsula.

The bus still has a long way to go to be able to start being produced and sent to other areas of China and/or the world. The reason it hasn’t exploded onto the market is because of the business is a little sketchy. They said they tested it on a track, but the track didn’t exist and also got money from anonymous investors.

It was first seen at the Beijing High-Tech Expo in 2010 and then again in 2017. The owner said that five prototypes were being made and being shipped to different places but so far only the one has been released. The Transit Elevated Bus seems like a far-fetched idea to most of the world but a clever solution to the traffic and transportation problem in China.