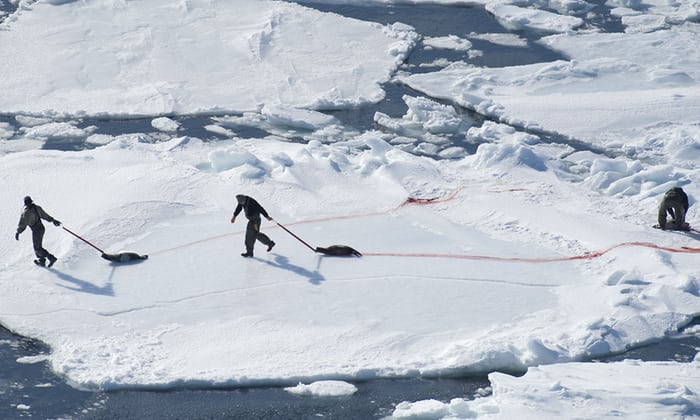 Canada has a seal hunting season, which is in the spring. They are hunted for their skin, meat, and fat. Seal skin is made into seal pelts, which sever as cold-weather clothing. The fat is used for cooking oil, fuel, and soap. The meat is high in protein, iron, calcium.

Substance hunters use ever bit of the seal and mostly hunt adult seals. there’s other kinds of hunters called commercial hunters. They  target baby seals and unlike the substance hunters, they one take the seal pelt and leave the rest. The weapons used are firearms, the two used are from long-range and hakapiks from short-range.

The hakapik is the best one to use. It is a long-handled hammer with a blunt side. According to Eluxe Magazine they are more reliable than firearms. With a long-range rifle it’s not for certain the seal will have an immediate death.

Seal hunting is an important income to the Inuit Canadians. They hunt on a small-scale, selling the skins to the government officers that take them into international markets. Inuit leaders want the bans on seal products in Europe ans the U.S must be repealed.

Even with the important income to the Inuit, the demand for seal product has fallen. The government justifies the seal hunt by saying its a cultural and economical importance. According to Woodford the hunting can account for as much as 40% of annual sealers income. Since so many people earn most of their living off fishing, the Canadian government set aside $2.5 million a year to oversee the hunting.