The Galapagos Islands, After Being There 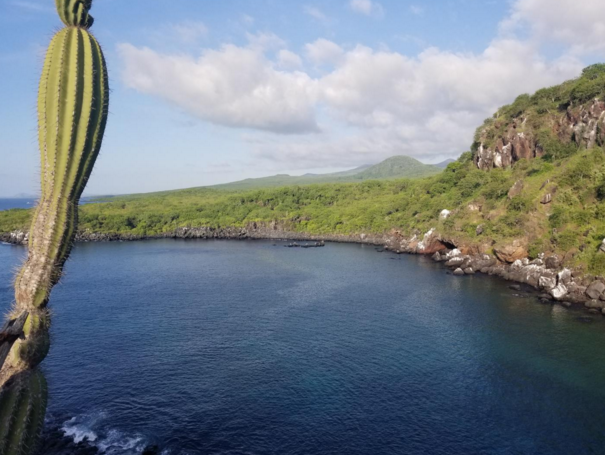 About one week ago, I went to the mainland of Ecuador, as well as the Galapagos Islands. There is no way that I can touch on everything amazing that I saw, just because there was so much of it. But overall, it was an experience that I definitely will never forget. Here is why:

When we first got to Quito (which is the capital of Ecuador) we were all very tired from a day of flights and layovers. But stepping out of the airport and seeing that there were actual palm trees right in front of us was amazing. And although we could not see much considering it was late at night, we could tell that it was a lot different from where we came from.

Quito is a lot older than the United States. And there, (instead of old buildings being destroyed to make room for “better” ones) everything is built upon itself. We walked to the top of an ancient church to see the city, and the view was indescribable. The hills around us were covered with small colorful houses and buildings, and it was insane to think that there were people, each with their own life and stories, in all of them.

The next day, we flew to Galapagos. When we got there, the first thing I noticed was the beautiful turquoise color of the water surrounding the ocean. The other thing that became obvious throughout the first day was that Galapagos is very rich in different environments; the difference between some of the islands (that were only a short boat ride apart) was the difference between a rainforest and a desert.

The wildlife was amazing. Lizards and sea-lions were like dogs and squirrels there, so every time I saw one it was hard to believe that there were so many others. When we were snorkeling, one of the sea-lions came close enough to touch us. And at the bottom of the shallow area, there was a sea-turtle. The turtle was possibly the most beautiful animal I have ever seen.

One of the highlights for me was when we hiked up to the top of an actual volcano. I expected it to be kind of cool, but not anywhere near as beautiful as it actually was when we finally reached the peak. To be able to see that something that was once so violent and destructive now coexisted with the same species it once destroyed really made me realize the power of our Earth. There, we had a moment of silence for everything we had seen so far. It was the most peaceful silence I have ever felt.