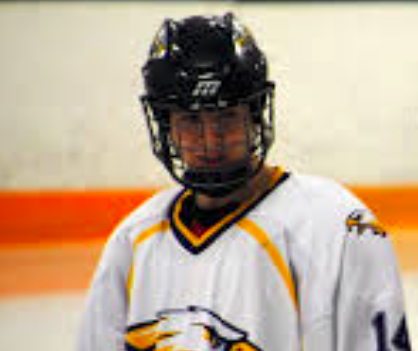 Senior of Lakewood High School Patrick Gilman’s time as a student is coming to an end. Patrick was a Captain this season on Lakewood’s Varsity Hockey team. He moved to Lakewood between his Sophomore and Junior years and has played a large role in the team’s success since. He’s been playing hockey since he was just 5 years old.

“I knew we had a shot at winning the division, but I didn’t expect us to perform as well as we did against upper division teams,” Patrick said, “I’m really happy about our regular season performance with us winning the division but the playoffs were disappointing. The game against Nordonia in the first round of the Baron Cup should not have been that close and our second round lose to Avon Lake was tough because we played well against them except for those 2 minutes when they scored both their goals.”

Patrick finished the season with 34 points and made all Blue Conference Second Team. He was a key key factor in the team’s success, contributing several important plays such as his game winning goal against Avon in overtime.

Many believe Lakewood Hockey will continue to perform well in future seasons, including Patrick who said “We’ll have a strong team, especially with the incoming freshman who have experience.”

Patrick said his favorite memory was “Beating Brooklyn on Senior Night, which pretty much clinched us as Co-Division Champions with Brooklyn since they beat us in our first game and we were both 10-1.”

Patrick plans to continue playing hockey whenever he can and that what he’ll miss most about high school hockey is “My teammates.” After he graduates, Patrick will join the Army as a combat medic.