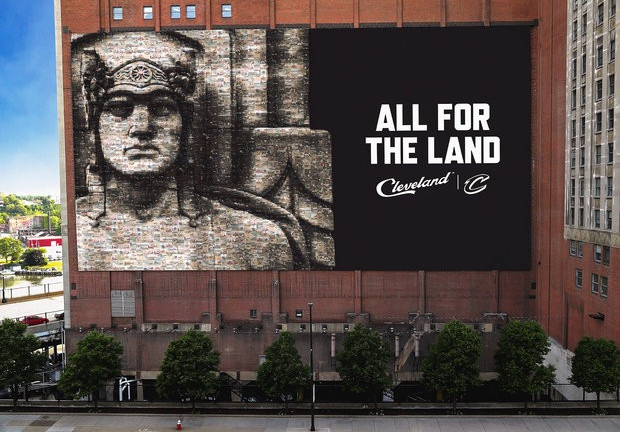 If you live in Cleveland, you most likely have seen the iconic poster of LeBron James that used to occupy the side of the building across from the Quicken Loans Arena. After LeBron James left the Cleveland Cavaliers for the Los Angeles Lakers earlier this summer, the poster was taken down, leaving the building barren. No one knew what, if anything at all, was going to replace this recognizable poster.

The Cleveland Cavaliers have just unveiled an image of the proposed banner. The Cavaliers Chief Executive Officer, Len Komoroski, claims that the banner is a “grand civic gesture.” As of Friday, they have just received a quick and unanimous approval from the Cleveland City Planning Committee. The Committee members said that they specifically liked the inclusion of all Cleveland residents in the poster.

This banner will no longer depict just one superstar of the team. It might seem that the new banner is simply grainy from a distance, but the picture is deeper than it looks. It includes thousands upon thousands of pictures of regular people. Regular people who encourage the individual players, and the team as a whole. The central picture that is created is from the landmark “Guardians of Traffic”, which can seen on the Hope Memorial bridge. The background will be black and contain the tagline “All for the Land.”

The Cleveland Cavaliers have been a part of the city’s history and legacy for many years, so it is appropriate that whatever replaces the old poster will be a testament to the team and to the city that supports them.