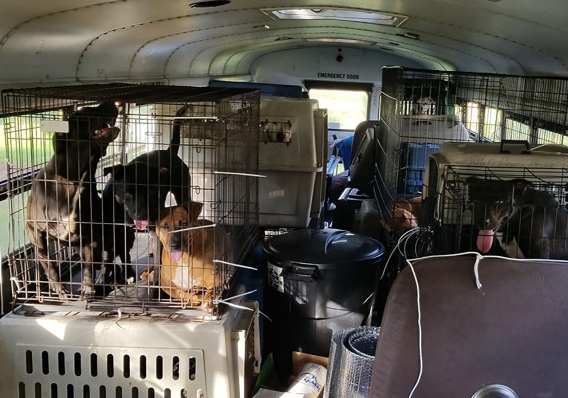 More than 1.5 million people were ordered to evacuate North and South Carolina before Hurricane Florence came barreling down. People fled leaving so many loved belongings behind, they even had to leave behind their loved ones.

There is one very important detail people always seem to overlook, which is the pets. How do the pets manage out in a life threatening storm? Their Families abandon them, they lose their home and have no idea where to go.

One very resourceful individual, Tony Alsup, took it upon himself to go out and save the helpless pets left behind or lost in the storm.

Pets are often forgotten, overlooked, or even deemed not necessary to bring along on these kinds of evacuation trips, which is why Alsap made it his mission to find as many pets as he could and bring them to safety.

Alsap decided it was time to take action and help those who need it the most, the dogs and cats!

He is a 51-year-old man from Tennessee. He drove from his house down to four towns in South Carolina in an old school bus. These towns including Myrtle Beach, Dillon, Georgetown, and Orangeburg according to Greenville News.

He traveled from town to town in his old bus with writing on the sign that read “Emergency Animal Rescue Shelter,” picking up all of the furry friends he could get his hands on. This included 53 dogs and 11 cats.

He began his journey as soon as Florence was downgraded to a tropical storm. Did that mean that there would not be issues along the way? Nope.

He ran into severe flooding and had to pass through a lot of the main damage done to the state. It was quite a mission some think that what he did was dangerous and unnecessary, others think it was a very brave thing, including Lakewood’s own, senior Miranda Larimer said “He went out of his way to rescue these helpless animals. That is amazing.”

He rescued the four-legged friends to an animal shelter in Foley, Alabama according to the New York Post. He is now considered a “true animal warrior,” and a local hero.