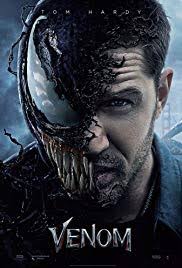 Venom is a fictional character appearing in American comic books published by Marvel Comics. It cost 170 million dollars to make the movie Venom. Venom has made about 225 million dollars in one weekend; it came out on October 5, 2018. It has broken box office records.

Marvel has been teasing the movie since 2009 and people wanted the movie since after the Spider-man movies. However, They started filming the movie in 2017. They have been looking for the right actor to cast Venom and they found the perfect match, Tom Hardy. Tom Hardy is the best fit because of the way he talks and he acts with passion.

Venom brings the attention because of the way he looks. From the multiple rows of teeth to the tentacle-like tongue and dripping saliva, Venom is looking scarier than ever before. Last time Venom was in a movie was Spider-man 3 in May 4, 2007. After that, we have not seen Venom till now. The movie Venom is intended for younger audiences even though it looks scary and is rated PG-13.

After this movie, Sony plans for Venom to launch its own film series. In July 2017, Panitch (film owner) indicated that future Venom films could crossover with the Spider-Man movies.

LHS Senior Joe Baire said, “This movie was pretty good because Venom looked amazing in it, but, the plot was not the best.” Rotten Tomatoes has the movie at a rating of 29 percent. However,  IMDb has the movie as 7.5/10 and 95 percent of google users loved the movie. Venom will continue to break box office record.