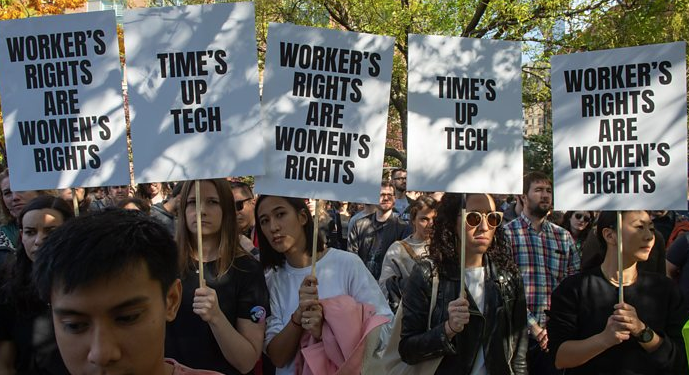 At 11 a.m. local time November 1st, more than 20,000 Google employees walked out of their offices to protest Google’s history of protecting its employees who have been accused of sexual harassment. The walkout was sparked by the $90 million settlement given to Andy Rubin, the founder of Android, after charges of coercion were found relevant by Google. Upon exit, Rubin received this money and created his own successful company–which in no way punished him for his seriously questionable actions. This, however, was not the first time.

In an interview with an anonymous Google employee, I was able to hear firsthand what the walkout was like among other sentiments.

Anon: “The walkout was a protest focused on the way Google handles sexual harassment. I believe it was well run and accomplished the goal of making our voices heard. I would say there was close to equal representation between men and women, as well as leadership who came out to support the protest. At first it wasn’t entirely clear what we were hoping to accomplish other than sharing our discontent for the way things are, but then a list of demands were brought together and it gave clear, actionable solutions that we wanted leaders to implement. Prior to the walkout, people were given an opportunity to anonymously share their experiences if they wanted to. Some of the things that were shared were horrific and don’t embody the values Google chooses to uphold. For example, one woman said that when she told a People Ops rep about a grievance with a senior leadership member, the People Ops individual responded, ‘Think about this before you choose to move forward: who is easier to replace, you or the senior executive.'”

Boland: How did the executives at Google react?

Anon: “Executives were very receptive. Changes are actively being implemented and they definitely heard us out. Really pleased with the way they are responding.”

Boland: How did you feel?

Anon: “As sad as it is, this behavior is so common that I feel desensitized to it. I had a problem with a professor during college and (in light of these protests) I was able to come to terms with that personal experience. I realize it wasn’t my fault and that he should have faced more serious consequences. Overall, I’ve realized the importance of standing your ground and facing these uncomfortable conversations with a clear goal in mind and sticking to it.”

Boland: Do you feel safer at work after the walkout?

Anon: “I definitely feel safe in my day-to-day responsibilities. This experience at Google has prompted for open and honest conversations. We’re trying to hold ourselves above industry standards and show a clear path for improvement not only internally, but also externally.”

I was extremely lucky that the above Google employee responded so openly and honestly when asked specific questions, as well as painting a descriptive picture of the walkout and its effects. Clearly, sexual assault in the workplace needs to be brought to light everywhere, as sexual assault happens much more than we think–Google employees are the first to widely protest and receive such a supportive response from executives.