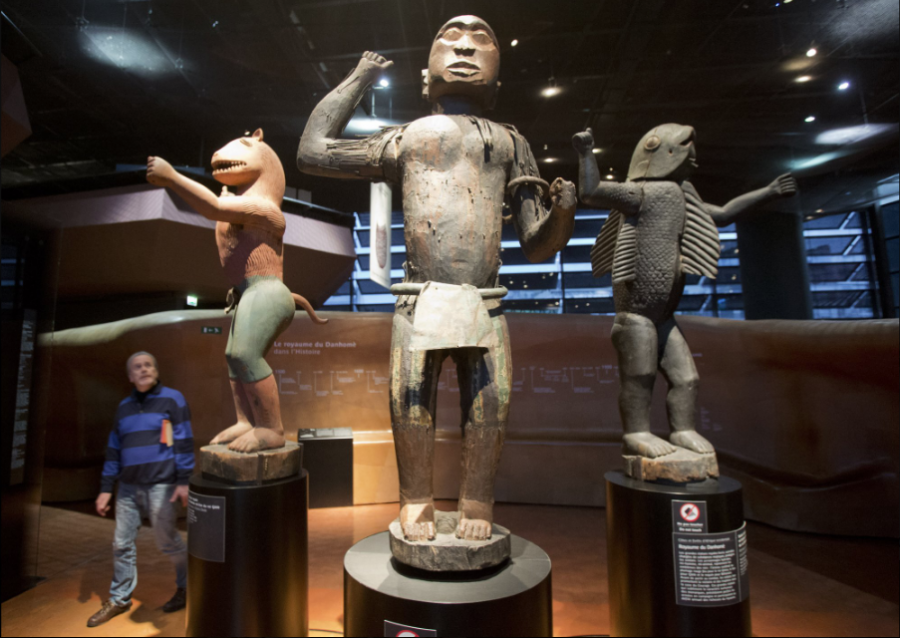 The Musée de quai Branley- Jaques Chirac is a bustling museum in Paris, France, filled to the brim of artwork and treasures from Asia, Africa, Oceania, and the Americas. The museum has a collection of about 450,000 objects and 3,500 are displayed at any given time, in both permanent and temporary exhibits.

It’s well-known for its elaborate African artworks, such as carved thrones, doors to royal kingdoms, and wooden statues that are embedded with religious and spiritual history. However, even though these artworks are a major attraction, they may be headed back to Africa.

French President Emmanuel Macron received a report on Friday, asking for the return of art that was looted years ago from Africa.

Everywhere from Senegal and Ethiopia, artists, governments and museums waited on the edges of their seats for the report by French historian Benedicte Savoy and Senegalese economist Felwine Sarr, commissioned by Macron himself.

The report recommends that all art that was taken without consent be returned. An action like this would increase pressure on museums elsewhere in Europe. One of the most disputed works is from the Dahomey kingdom (which is now located in the country Benin), the metal and wood throne of King Gezbo and just as imposing, wooden statues.

A situation similar to this happened recently in New York. A couple of weeks ago, a 3,000 year old piece of Assyrian Art was sold for nearly $31 million. An argument quickly erupted that the panels were taken illegally from Iraq and should be returned because of “cultural and historical significance.”

Senegal’s cultural minister, Abdou Latif Coulilbaly, told the Associated Press in an interview, “it’s entirely logical that African’s should get back their artworks… They were taken in conditions that were legitimate at the time, but illegitimate today.”

The report is only the first step. Upcoming challenges include enforcing the reports recommendations, especially if museums are unwilling to cooperate, and how and when the artworks were taken.