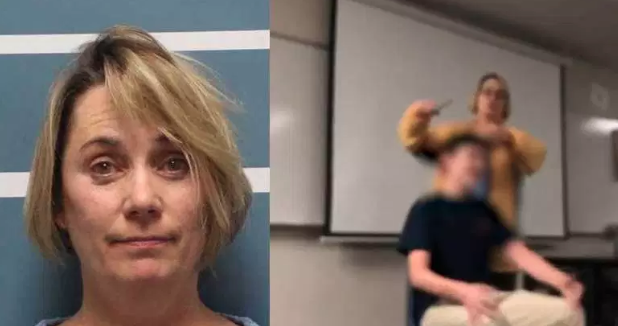 A teacher in California has been fired and faces criminal charges for forcefully cutting a student’s hair in class. Margaret Gieszinger, a 52-year-old ‘former’ teacher at University Preparatory High School in Visalia pleaded not guilty to six charges including  one count of false imprisonment, two counts of cruelty to a child, two counts of battery, and one count of assault.

When Wilson Reynolds IV, a Lakewood High School student was asked about his thoughts on Mrs.Gieszinger’s actions, he responded “I have no idea what brings people to do such random and abusive acts, the way she treated her student is horrific, there has to be something below the radar that we have not found out yet. The average person would not even think of doing something of that manner.”

Footage of the incident shows the teacher calling for a student to volunteer by sitting in a chair in front of her while she waves a pair of scissors. After a hesitant student takes a seat, she begins yelling out an “incorrect rendition” of the National Anthem while cutting the student’s hair. She later walks through the aisles of desks while lunging at other students with the same scissors used to cut the previous student’s hair.

“I go to school to see my friends and get my work done, not to get a hair cut. For a teacher to act like that is terrible, they are supposed to be role models not bullies.” said James Toole, a freshman at Lakewood High School.

Ms Gieszinger was released on a $100,000 bail late on Friday and awaits trial.