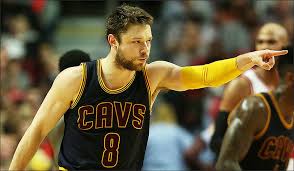 Matthew Dellavedova is an Australian professional basketball player for the Cleveland Cavaliers of the NBA (National Basketball Association). He played college basketball for Saint Mary’s College and has played on the Australian national team. He was drafted in 2013 to the Cleveland Cavaliers and then in 2016, Matthew Dellavedova won a championship ring with Lebron James in 2016; he was then traded to the Milwaukee Bucks.

Matthew Dellavedova, also known as Delly, helped Cleveland win a Championship and he played a big part. Delly averaged 3.3 points, 1.1 rebounds, 2.6 assists and made 100% of his free throws. His stats might not show his hustle, but he played amazing defense as a backup point guard. The Milwaukee Bucks, Cleveland Cavaliers, and Washington Wizards pulled off a multi-player trade on December 14, 2018. The Cavaliers got Matthew Dellavedova back and got big man John Henson from the Bucks. They also got a future first and second round draft pick in exchange for point guard George Hill.

The Wizards joined as a third team in the trade, getting Sam Dekker from the Cleveland Cavaliers, while Jason Smith and a second round draft pick will be traded to the Milwaukee Bucks.

Senior Dominic Wahba said, “I’m glad we got Delly back because we needed a backup point guard that can shoot the ball and pass the ball.”  The Cleveland Cavaliers got a steal because George Hill recently returned after missing 11 games with a shoulder injury, and the Cavs have been hoping for a deal.

Dekker has also been sidelined with a severely sprained left ankle and he did not fit in with the Cleveland Cavs, so they let him go. Overall, Delly is loved in Cleveland and the fans are glad he is back.