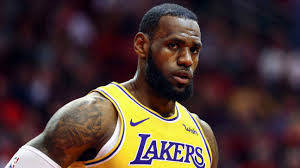 LeBron James returned to the floor Thursday night as the Los Angeles Lakers faced the Los Angeles Clippers at Staples Center. Lebron would end up scoring his first point in over a month around 4 minutes into the game. He would end up only having 5 points in the first half but would finish the game in overtime with 24 points. The Lakers would end up losing 123-120.

It was easy and clear to the eye that the addition to LeBron on the floor the Lakers were contenders. During his leave, the Lakers went 6-11, falling 9th in the West standings. The Lakers would even fall to the Cavaliers, LeBron’s old team who is currently 11-41.

According to Yahoo Sports LeBron told reporters “After being out five weeks, I’m not feeling it right now,” James said. “I wish I could click my shoes together and be home right now in my bed.” Lebron is needed for his team to even have a chance at the playoffs. Up until his injury, LeBron was averaging 27.3 points, 8.3 rebounds, and 7.1 assists in 34.6 minutes a game.

The Lakers began a six-game road trip Thursday. Their next game is in Oakland against the defending champion Warriors on Saturday. We Talked to Tiernan O’Malia a long time basketball fanatic and asked what he thinks Lebron will bring to the table for the Cavs. “I think the Lakers not only want LeBron to fully return but they need him too.” O’Malia would go on to say-” I think Lebron really wants to come back, he sees that the only way the Lakers will go anywhere this season is if he dominates again.