“Cal’s Day Off” Written by Anonymous Illustrations by Madison Viccaro

The past century is best described as an era of destruction. The wasteful and self-cannibalizing acts of humanity have laid utter waste to the biosphere, shrinking what was once a vast number of unique and beautiful species into a small handful of only the most resilient ones. In response to this, the scientific community has started genetically altering humans in order to recover some of what has been lost. So far, they’ve only been able to recreate the most common animals from earlier times, often referred to as Children’s Book Species (or CBSes for short) due to their frequent inclusion in literature aimed at very young children.

I myself am one of these creatures: a female hybrid between a human and a German Shepherd. My parents named me Collie, a name so blasé that I can feel my innards retch every time I have to use my full name. As a result, I go by Cal whenever possible. Sadly, my job as a police officer makes it so that I have to view my legal name more that  I’d like to. I do the standard stuff you’d expect a member of the police force to do, sniff out drugs and track down criminals and whatnot. While I have no particular affinity for my current position, the high levels of racism towards people like me doesn’t leave a lot of choices when picking occupations.

After pointlessly reminiscing about my current situation, I glanced at the clock. The dim red display read 8:30, which would be cause for alarm if it wasn’t my day off. I lethargically rolled out of bed and got ready for the day ahead. I took an insanely long shower (thanks to all the fur) put on heels along with my favorite ambiguously colored dress, grabbed my purse, and set off to my local cafe.

The sky was cloudy as usual, without a drop of rain in sight. I strolled down the street, trying my best to ignore the occasional derogatory bark from other pedestrians. Eventually I got to the store, and went to the counter to make my order.

The owner of the shop was a young female cat hybrid with calico fur, named Kit.

“Hey Cal,” she said in a peppy voice, “What’re you in the mood for today?”

After about 10 minutes, my order was ready. It was a plain black cup of coffee, which was as strong as it was tasty. I delicately grabbed the mug and went outside to one of the tables.

A hobby of mine is watching the various people on the street while I have my coffee. I find that there is much enjoyment to be had from taking a small snippet of someone’s life and trying to speculate on who they are and what they’re doing. For example, there was what appeared to be a couple bickering just across the street. Why were they fighting? Were they really a couple or just acquaintances?

I had fixated on the two for a while, endlessly guessing about who they were and why they were fighting. This came to a quick stop, though, when one of them threw a punch at the other, landing a hit square in the lower jaw. Even though it was my day off, I still had a sworn duty to protect civilians from harm.

I hastily reached into my purse, snatching the spare pair of handcuffs that I carried in case of emergency. I jumped out of my seat and sprinted towards the perpetrator. This turned out to be a bad idea, as my heels and rather tight dress caused me to go off balance and faceplant on the pavement. The noise from the collision was loud enough to alert the assailant, and he started to run away. Noticing this, I shoved myself up from the ground, and started chasing them again, this time being more careful in keeping balance. He ran straight for about two blocks before veering off into a nearby alley. I followed suit, and felt a rush as relief as the assaulter had cornered themselves against the wall. With one final charge, I tackled the assailant and cuffed them before calling the authorities. The problem was solved, and the town was safe once again. 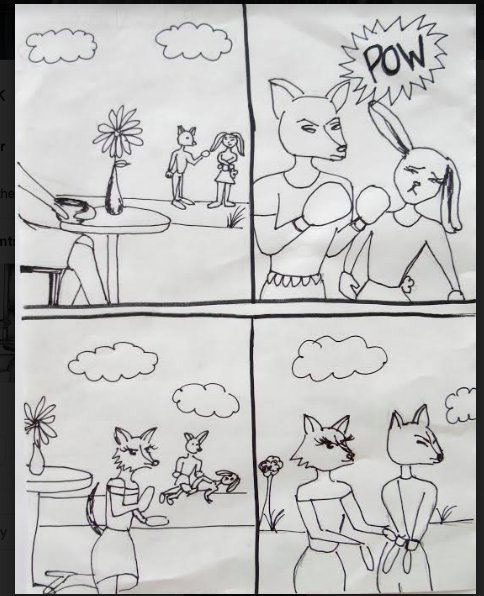