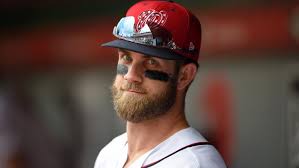 New salary standards have been set in the MLB. On Thursday, the Philadelphia Phillies and outfielder Bryce Harper agreed to terms on a 13-year deal worth $330 million. Bryce Harper is just the most recent player to reach these figures, he is one of many superstar free agents to account for the new salary standards. 330 Million is the most ever guaranteed to a baseball player but this means he will likely remain in Philadelphia until the end of the 2031 season.

Manny Machado became the first free agent to earn a $300 million contract when he signed a 10-year deal with the San Diego Padres. On Wednesday, the Colorado Rockies made Nolan Arenado the game’s highest-paid position player by signing an eight-year, $260 million extensions.

The Phillies odds to win the World Series have rocketed, with 10/1 odds to win the title.  The Phillies recently jumped to 18/1 when the odds were first published in October and moved to 14/1 after adding big names like Andrew McCutchen,  Jean Segura,  and David Robertson. Harper was able to move the odds from 14 to 10 by himself, which is crazy.

Harper has a career batting avg of .279, with a total of 184 HR. The addition of harper to any team would not only impact the players but also the stands. After the news of the big deal, ticket prices have skyrocketed. Tickets went from 48$ to 87$ within minutes.

We talked to LHS baseball player Max Lewellyn about his thought on the big deal. “Harper’s free agency has been a big deal for a while now, I just wish the Cleveland Indians picked him up.”