Here We Go Again with another Great Play 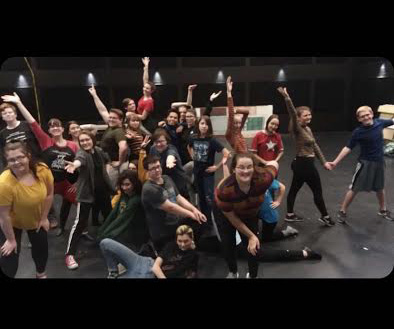 The Drama Club is now preparing for the final play of the school year. The play they are performing is, Mamma Mia. Everyone in the drama department is contributing so much time and effort towards this performance. Everyone is preparing for it and expecting it to go very well.

The excitement from the students, when it was announced that Drama Club was performing  Mamma Mia, was very electrified. Hearing many people around the school, saying they are very excited to see this play was amazing. I asked Mikey Minadeo, acting the part of Harry Bright, what he is mostly looking forward to throughout this play and he respond, “I am mostly looking forward to the final result, with the full set and costumes.”

While asking Mikey Minadeo questions, I had asked, “What is the most exciting part of this play compared to all the others you’ve participated in?” Mikey had answered this question by saying, “The most exciting part for me is probably playing a big role and it is the most choreography I’ve ever had to memorize. Compared to other shows I’ve been in, this is most challenging and I love that.”

This performance is definitely going to one to remember. Everyone is excited to go see the performance and so am I! Personally I can not wait to see this play and I am very excited to see the final result! Performances starting the first week in May 2nd, 3rd, and 4th all starting at 7:30pm. This is going to be a play you won’t want to miss!