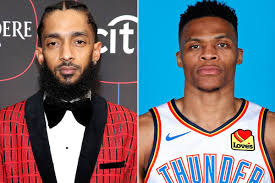 Russell Westbrook is a professional basketball player for the Oklahoma City Thunder of the National Basketball Association (NBA). He is an eight-time NBA All-Star, and a two-time NBA All-Star Game Most Valuable Player (MVP). He has been averaging triple doubles the past three seasons.

On April 3rd, Westbrook was singing and dancing along to Nipsey Hussle’s song. Hussle was shot and killed, Sunday, March 31st, 2019, outside his clothing store in Los Angeles, California.

Russell Westbrook recorded the second 20-20-20 game in NBA history — posting 20 points, 20 rebounds, and 21 assists. The only person that has ever done that was Wilt Chamberlain. Westbrook had previously reached 20 rebounds in a game just once in his career, and he had topped 20 assists just four times.

In his closest previous attempt at a 20-20-20 game, Westbrook had a huge game against the Lakers. Westbrook walked off the floor following a 119-103 win. Westbrook, who grew up in Los Angeles, where Nipsey Hussle was a legend.  Nipsey Hussle was one of the best rappers ever to perform. Ever song he wrote and rapped had a meaning behind every song. Nipsey Hussle changed the rapping game. After he died the music community was not the same.