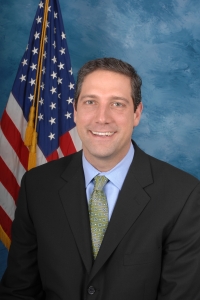 In the past few months, numerous politicians have stepped forward to announce their running for the 2020 democratic spot;  the handful of people include candidates such as Elizabeth Warren, Kamala Harris, Beto O’Rourke, Bernie Sanders, Corey Booker, and more. Though they may all be different people, with slightly different agendas, they have one common goal; beat the incumbent, Donald Trump.

As if there were not enough candidates to choose from, another Democrat, Tim Ryan, announced his bid for the presidency. Ryan is the representative for the 13th Congressional District in Ohio, which is in the northeast area ranging from Youngstown to Akron; Ryan has served as representative for sixteen years. At age forty-five he is relatively young compared to other politicians.

He announced his candidacy right before appearing on ABC’s “The View.”  Compared to the other candidates he is set at a disadvantage due to name recognition and campaign finances. When on “The View” he spoke about his platform claiming that he would, “Run on an economic message, including increasing the minimum wage and attracting new jobs to struggling areas like his home district,” according to news source, Cleveland.com.

Ryan in the past has been more conservative, such as being anti-abortion, but he claims he is not a conservative democrat or even a moderate, but instead one for the working class people.

An anonymous Lakewood local claims said that, “I am excited to see a wide range of people putting themselves out there and taking the first step to better our country, better yet one of the candidates is a Ohio native which is even cooler.”

The primaries are not until next spring, but everyone is already on their toes waiting to see what happens in 2020.