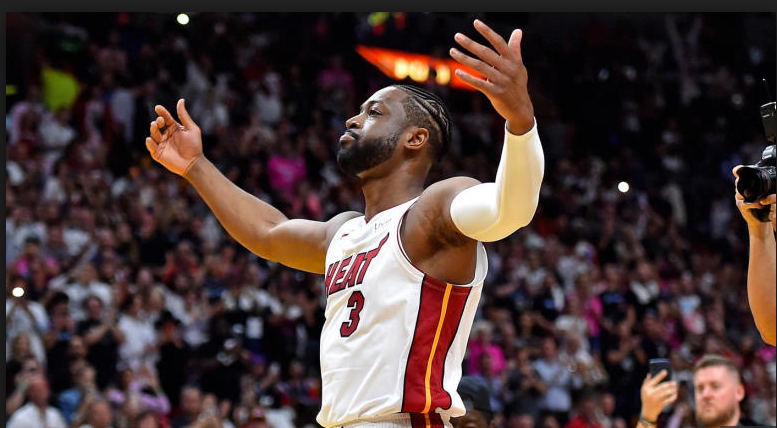 Dwyane Wade played his last game Wednesday night. Not only was it his last night playing, but this game also eliminated the Miami Heat from playoffs. Although it was a sad night, they were also celebrating the 16 years and 3 rings that the 6 foot 4″ player brought to the organization. Dwyane Wade opened the scoring with a dunk and ended the game with 30 points.

After the game, no one left their seat. The arena remained packed. Wade jumped onto the scorer table for one last time, and although he tripped on the way up, it was still a sight.

The real tear jerker of the night was the Budweiser commercial. The video shows Wade’s collection of NBA players’ jerseys decorating a wall of his house. His wall includes appearances by Los Angeles Lakers star Lebron James, Brooklyn Nets’ D’Angelo Russell, and many more.

Budweiser decided to help Wade by getting five more jerseys that would finish the wall. The five jerseys were dedicated to people whose lives were changed by Wade’s contributions off the court. Budweiser invited each of them to the arena to surprise Wade with their jerseys.

The first person to walk in was the sister of Joaquin Oliver, who was a victim in the Parkland Shooting. Wade was Oliver’s favorite player, and the NBA star wrote his name on his shoes in his memory.

A woman whose house burned down on Christmas was the next guest. Wade took her family on a shopping spree after learning of that tragic news.

Next was a man whose life was spiraling out of control. Wade’s past words encouraged the man to change his life.

A woman who was struggling to pay for college also greeted Wade. The star’s organization reportedly granted her a full-tuition scholarship.

Last but not least was Wade’s mother, Jolinda Wade. She ended the ad congratulating her son on making such an impact in his community and in the NBA.

With Dwyane Wade gone, there is a gap open on the Miami Heat’s roster. They have no more stars. The Heat has a handful of players but none of them stars.

This concludes our question who and what is next for the Miami Heat.