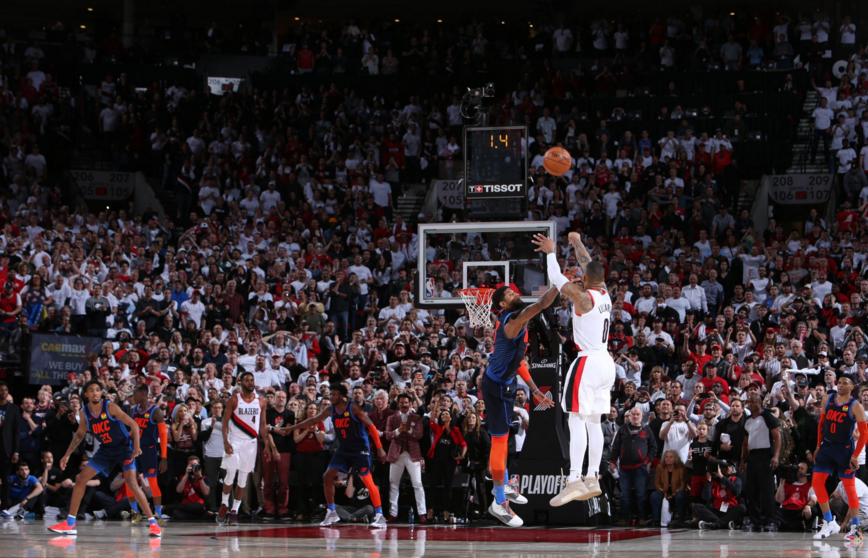 For the most part, the first round of the NBA playoffs has been a snooze fest other than this series. It was full of physical play and pettiness on and off the court. Damian Lillard and Russel Westbrook went at it all series long talking trash to each other but Lillard ultimately got the last laugh.

The Trail Blazers returned home on Tuesday night and closed out the Oklahoma City Thunder in thrilling fashion. After putting up a record-setting 34 points in the first half, Damian Lillard played hero for the Blazers, knocking down a series-winning buzzer-beater to send the Thunder home.

Lillard finished with 50 points in Game 5, as the Trail Blazers won, 118-115 to clinch the series, 4-1. With time winding down and the game locked up at 115, Lillard stepped back and launched a 37 foot three at the buzzer to put them into the next round. The big shot from Lillard also capped off a furious 15-point comeback in the fourth quarter, as the Trail Blazers outscored the Thunder, 28-10 over the final seven and a half minutes of the game. Senior Adam Hascher said, “That was one of the greatest shots I have ever seen.”

Even though Portland was the higher seed, many thought the Thunder would still win the series because they have more star power in Russel Westbrook and Paul George. This is the third straight year that the Thunder have lost in the first round.

One season after being swept in the first round by the New Orleans Pelicans, the Trail Blazers are moving on to the second round. There, they’ll face the winner of the Denver Nuggets vs. San Antonio Spurs series, which the Nuggets currently lead, 3-2.