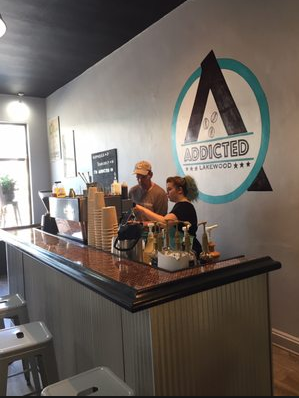 A Facebook post about the delicious milkshakes at Addicted in Lakewood has gone viral. Addicted opened on Madison Avenue in September of 2017. Addicted is known mostly for coffee, started selling the crazy milkshakes on St. Patrick’s day.

The Owner’s of Addicted, Vincent Brunori and his wife Jeannie were surprised how quickly the new drinks took off. Vincent said that the line was constantly out the door on Tuesday. He said the store has been getting a lot of feedback and they are going to start some specials soon involving the milkshakes, and possibly some BOGO’s.

Brunori said his business is family owned and his family enjoys being part of the community.

“We’re family-owned and buy everything local. We have a lot of vegan ice creams and we’re dog-friendly. We’re a community-based business that is trying to grow but wants to keep the personal touch,” Brunori said.

Addicted is teaming up with Meijer’s and will be opening two new locations in May of 2019 in  the Mentor and Stow locations.

Addicted sells any coffee-based drink a person could want and offers four flavors for the milkshakes, and you can choose any base flavor you want.

Lakewood High School’s very own Kaleb Weiss said, ” this looks and sounds amazing, I want to go and try one. They came up with a great idea and they will be making a lot of money off of this cool idea.”