Why the Celtics will win the NBA finals. 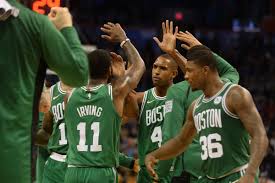 The Boston Celtics have been on fire lately. They have caught fire at only the first round. They swept the Indiana Pacers in just 4 games. The big reason for this is Kyrie Irving. He is an amazing leader and a great player. Kyrie has led the Celtics all season and leads them in scoring. He is a very unselfish and complete player. His defense and hard work on both sides of the floor show it.

The Celtics are one of the only teams in the playoffs that can match up against the defending champions, the Warriors. That is a very hard thing to do considering they won back-to-back NBA championships. Not to mention adding another All Star the previous off-season, Boogie Cousins. The Celtics have players such as Al Horford who can go up against Boogie Cousins. As many people might know the best player on the Warriors, stat wise is Kevin Durant. He would be one of the only people who would be difficult ton guard. Even then, players such as Jaylen Brown on the Celtics can matchup against him.

The Celtics are in the second round of the NBA playoffs currently. They will be facing the Milwaukee Bucks. Although in the season, the Bucks defeated the Celtics 2-1, a-lot has changed since then. As many have known Kyrie Irving and the Celtics had a few issues. At one point in the season the Celtics were struggling on winning. After that, the team put their heads togethor and went on a hot streak. As long as the Celtics keep playing at this level, they will win the NBA championship.