Bucks take game 2 from the Celtics 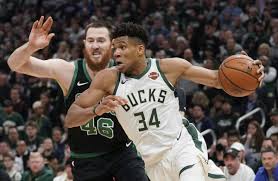 The Bucks scored a total of 123 points going 20-47 from behind the arc. Kris Middleton stepped up with 28 points. He was one of the three players to break the 20-point barrier. Giannas finished with 29 points, 13 of those points came from the line. He also added ten rebounds. Eric Bledsoe, who hit one shot in game 1 finished with 21 points and added 5 assists. These three players showed out and were unstoppable along the stretch.

As Giannas and Middleton supported the bucks, Kyrie Irving had a 9 point night with 4/18 shooting. The point leader for the Celtics was Marcus Morris,  who finished with 17 points. Jaylen Brown and Al Horford also added 16 and 15. The Celtics fell apart in the third quarter where the Bucks went on a 24-2 run. During that time, the Celtics shot 1-10 from 3 point range and turned it over six times. The Bucks got to the basket at will.

The bucks entered the fourth with a comfortable 98-73 lead. They extended their 24-2 run to 31-4. As the Bucks continued to dominate, the Bucks scored a basket, which was made by Eric Bledsoe to take the 30 point lead. At that point there was no coming back for the Celtics and were defeated.

The series is now tied at 1-1, game three will take place in Boston on Friday, May 3rd. The Bucks and the Celtics will both look to up 2-1 in the series.