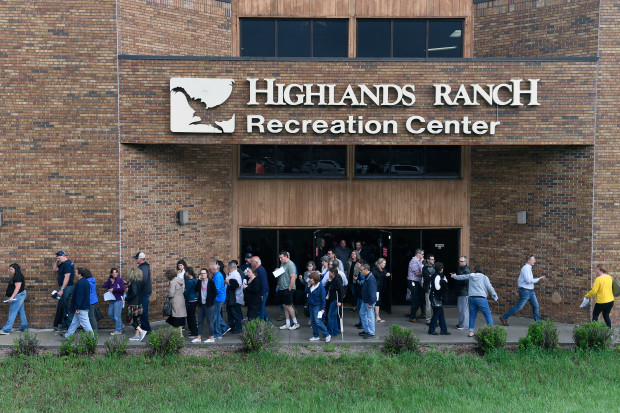 HIGHLANDS RANCH, CO - MAY 7: Parents are guided from the Highlands Ranch Recreation Center at Northridge to pick up their kids after a shooing at the STEM school after a shooting at their school on May 7, 2019 in Highlands Ranch, Colorado. A student shot at the STEM School in Highlands Ranch has died, according to Denver7, and law enforcement officials have reported eight students were injured in the gunfire that erupted Tuesday afternoon inside the school. (Photo by Helen H. Richardson/The Denver Post)

Throughout history there have been several school shootings. One of the worst being in 1999 at Columbine High School. Another tragedy happened, just yesterday, at STEM School. Two male students walked deep into STEM school and fired openly, injuring many and killing one.

STEM is a school of science, technology, engineering, and math. Students k-12 attended this school.

The only student killed, Kendrick Castillo, saved lives. Before the shooter could make a move, Kendrick tackled him, in the process he was shot. This gave students time to get to safety. Castillo will be known as a hero. He later died in the school.

The attackers managed to injure eight others as well.

The two male attackers were identified as students. Sixteen-year-old Alec McKinney, and eighteen year old Devon Erickson. The judge has yet to decide is he wants to charge McKinney as an adult in the case.

The both are charged with first degree murder, as well as attempted murder charges.

More than 1,850 students attend STEM. Several students at STEM could identify Erickson as a classmate.

According to NBC.com, Erickson was a bully toward most students at STEM, he would make jokes that shouldn’t be laughed about, such as “shooting up the school.”

Earlier in the year, there was a letter written to the school addressing a call that had been made. The call was made by a parent of a STEM student, showing concerns about the school and how there is a “wide range of misconduct.”

We are all thinking about the families that went through this tragedy.

Local, Lakewood High School student, Grace Stringer says “I can’t believe there has been another school shooting. It seems as if they are every couple of weeks. Something new to hear, and it’s devastating.