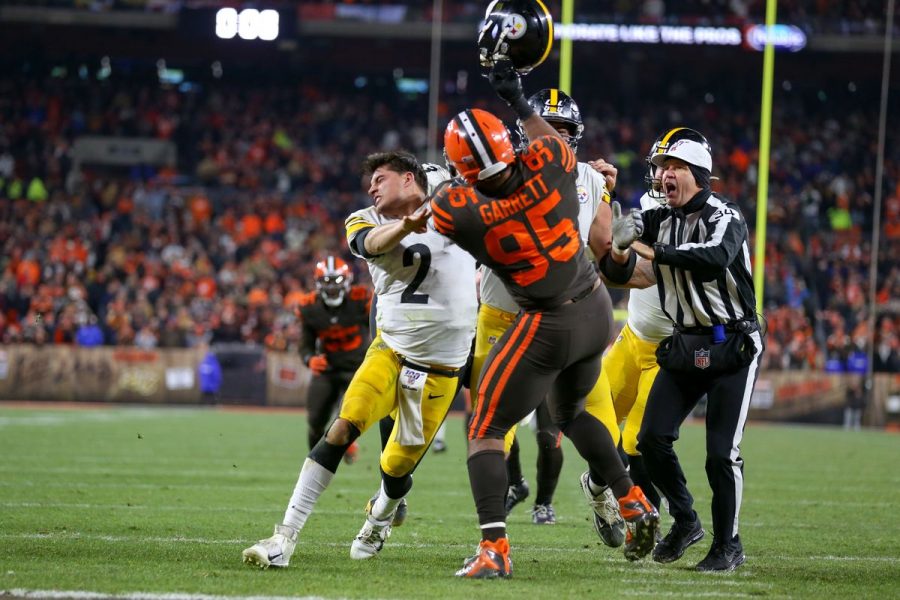 Last Thursday night, the Cleveland Browns suited up for a prime time matchup against division rivals the Pittsburgh Steelers. The Browns played very well on both sides of the ball and held a lead the whole game, eventually winning with a final score of 21-7. However what happened with 8 seconds left in the 4th quarter is what people are still talking about today.

Steeler’s quarterback Mason Rudolph dropped back to pass even though the game was essentially over, after throwing the ball he was taken down by Browns star Myles Garrett. Although no flag was thrown for a late hit, Rudolph was visibly upset. While Garrett was still on top of him, he kicked him in the groin area and attempted to take off his helmet, but failed. This prompted Garrett to take off Rudolph’s helmet. This angered Rudolph and his teammates as Steelers offensive lineman pushed Garrett away as Rudolph chased him down angrily. As Rudolph approached Garrett, Myles made the grave mistake of striking him on his head with his own helmet. Turmoil ensued.

Punishments were handed out just one day later: Steelers offensive lineman Maurkice Pouncey received a 3 game suspension for his brutal retaliation on a defenseless Garrett after the act, this has since been lowered to 2 games. Browns defensive lineman Larry Ogunjobi received a 1 game ban for his role in the brawl. And headlining the news: Myles Garrett was suspended indefinitely from the league, for a minimum of the rest of the season, a monumental ruling. Mason Rudolph was only handed a fine for his role.

Since then, Garrett has appealed his suspension to the league but was denied by the arbitrator. However in the process a new claim from Garrett surfaced: that Rudolph called him a racial slur while they were on the pile, a serious offense that although wouldn’t warrant the attack from Garrett, it would make his actions more certainly more understandable. However without any way to prove this offense, it is doubtful that this will change this outcome.

Browns super-fan and Lakewood High Senior Sean O’Donnell gave his input on the situation: “I still love Myles he’s a great player, what he did was wrong but I know at heart he is a good person.” I have a suspicion that these feelings are pretty consistent in the Browns community.