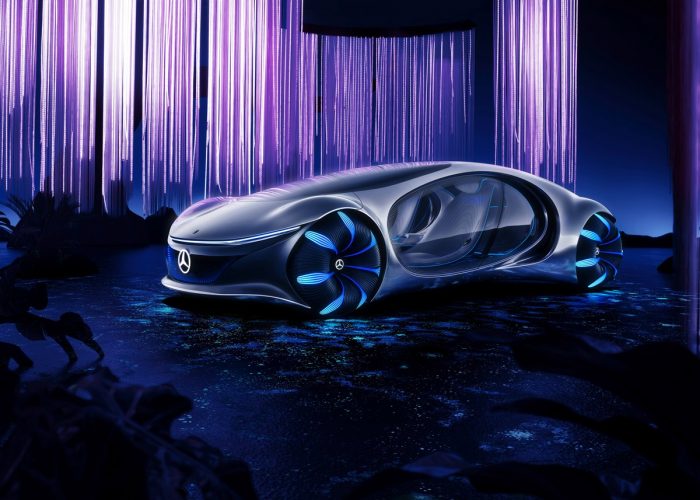 This car made by Mercedes-Benz is actually based on the movie Avatar from 2009. The color scheme is the same as the glowy forest from the movie, and this car is very different compared to most.

This car has two doors, and both of them are made of glass. It also has the look of a car that is from the future. The wheels’ rims curve in and are very smooth. The whole car also has a very smooth look to it. The whole entire car (from a side view) is shaped like a downwards curve.

Each wheel also has its own engine. This means that the car has a total engine power of over 350 watts, so each engine has about 90 watts. Mercedes-Benz says that this is a new benchmark for EQ Power. EQ Power is is a series of electric vehicles that Merceded-Benz is creating. The four-engine design also makes the car more efficient.

It also has all-wheel drive.  This means that every wheel can turn on its own. This causes the car to be able to move almost horizontally by about 30 degrees. People call this movement the crab movement.

Since the car is electric, it runs on a battery instead of petrol gas. This means that the car can charge at most charging stations. This battery has about 110 kWh. This car has an advanced charging system, so the battery can fully charge in about 15 minutes.

This car has an unusual steering wheel. It doesn’t actually have a steering wheel at all. It has a stick shift / ball-like contraption that you use to steer. “This doesn’t sound very practical,” says Colin Hill, a junior at Lakewood High School.