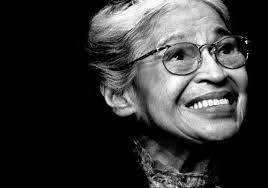 Everyone knows the Rosa Parks bus story but no one talks about her life story.

Rosa Parks helped initiate the Civil Rights Movement in the United States when she refused to give up her seat to a white man on a Montgomery, Alabama bus in 1955. Her actions inspired the leaders of the local Black community to organize the Montgomery Bus Boycott, led by a young Rev. Dr. Martin Luther King Jr.

Rosa Louise McCauley was born in Tuskegee, Alabama, on February 4, 1913. She moved with her parents, James and Leona McCauley, to Pine Level, Alabama, at the age of two to reside with Leona’s parents. Her brother, Sylvester, was born in 1915, and shortly after that, her parents separated. Rosa’s mother was a teacher and the family valued education. Rosa moved to Montgomery, Alabama, at age 11 and eventually attended high school there, a laboratory school at the Alabama State Teachers’ College for Negroes. She left at 16, early in 11th grade, because she needed to care for her dying grandmother and, shortly thereafter, her chronically ill mother. In 1932, at 19, she married Raymond Parks, a self-educated man 10 years her senior who worked as a barber and was a long-time member of the National Association for the Advancement of Colored People (NAACP).  He supported Rosa in her efforts to earn her high school diploma, which she ultimately did the following year. She joined the National Association for the Advancement of Colored People (NAACP) in 1943.

In her first years in the organization, she worked specifically on criminal justice and its application in Alabama communities. One part of this was protecting Black men from false accusations and lynchings; the other was ensuring that Black people who had been sexually assaulted by white people could get their day in court. This particular issue was close to Parks’ heart, as in 1931, a white male neighbor had attempted to assault her.

On Thursday, December 1, 1955,  at the age of 42, Rosa Parks was going home from a long day of work at the Montgomery Fair department store by bus. Black residents of Montgomery often avoided municipal buses if possible because they found the Negroes-in-back policy so demeaning. Nonetheless, 70 percent or more riders on a typical day were Black, and on this day Rosa Parks was one of them. Segregation was written into law; the front of a Montgomery bus was reserved for white citizens and the seats behind them for Black citizens. However, it was only by custom that bus drivers had the authority to ask a Black person to give up a seat for a white rider. There were contradictory Montgomery laws on the books: one said segregation must be enforced, but another, largely ignored, said no person (white or Black) could be asked to give up a seat even if there were no other seats on the bus available.

Nonetheless, at one point on the route, a white man had no seat because all the seats in the designated “white” section were taken. So the driver told the riders in the four seats of the first row of the “colored” section to stand, in effect adding another row to the “white” section. The three others obeyed. Parks did not.“People always say that I didn’t give up my seat because I was tired,” wrote Parks in her autobiography, “but that isn’t true. I was not tired physically… No, the only tired I was, was tired of giving in.” Eventually, two police officers approached the stopped bus, assessed the situation, and placed Parks in custody. Parks was found guilty of violating segregation laws, given a suspended sentence, and fined $10 plus $4 in court costs.

Facing harassment and threats in the wake of the boycott, Parks, along with her husband and mother, eventually decided to move to Detroit, where Parks’ brother resided. Parks became an administrative aide in the Detroit office of Congressman John Conyers Jr. in 1965, a post she held until her 1988 retirement. Her husband, brother, and mother all died of cancer between 1977 and 1979. In 1987, she co-founded the Rosa and Raymond Parks Institute for Self-Development, to serve Detroit’s youth.

In the years following her retirement, she traveled to lend her support to civil-rights events and causes and wrote an autobiography. When she died at age 92 on October 24, 2005, she became the first woman in the nation’s history to lie in honor at the U.S. Capitol.