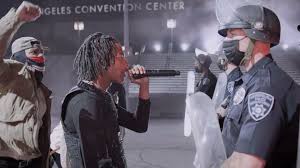 On June 12, 2020, Rayshard Brooks, a 27-year-old Black man and Atlanta native, was shot and killed by a police officer after falling asleep in his car outside of a Wendy’s restaurant. Also on June 12, Lil Baby, the biggest star in Atlanta hip-hop right now,  released “The Bigger Picture,” a raised fist in the Black Lives Matter movement following the police killing of George Floyd weeks earlier, and Lil Baby’s most socially-conscious song to date.

At the Grammys on March 14, the world witnessed Lil Baby’s full vision for “The Bigger Picture,” with a  performance that opened with a re-creation of the Brooks killing. Before the rapper launched into the song, actor Kendrick Sampson was woken up in his car, tackled, and eventually shot down by two white police officers. Lil Baby’s performance was an emotional gut-punch planned across multiple months and designed to viscerally recall the horror of the Brooks killing.

“I wanted to use a specific situation that would give people an understanding of where I come from,” Lil Baby said in an interview the day after the Grammys. “I didn’t really want to use the George Floyd or Breonna Taylor or something. I wanted to use something that stood by me. That happened in Atlanta, and I live in Atlanta, and I’ve been in some of those same exact situations.”

After “The Bigger Picture” became Lil Baby’s then-highest-charting hit on the Hot 100 chart,  at No. 3 last June, the song helped define the explosion of protest music last summer with the nationwide marches against racial injustice, and later scored Grammy nominees for best rap song and best rap performance.