How to be the Life of the Party; An Interview with Drew Wallen “HOCO Crowd Surfer” 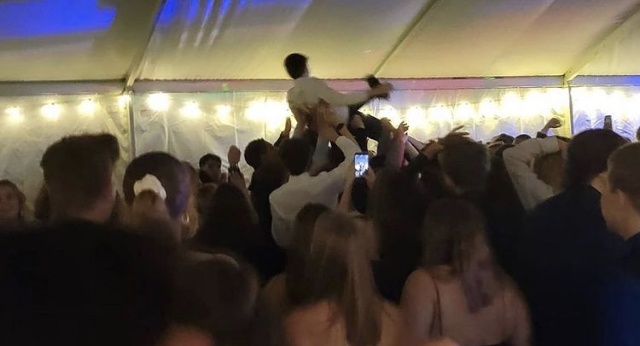 The talk of this week is Saturday’s Homecoming dance. If you were there, I’m sure you’ve heard of Drew Wallen, the guy who was floating amongst the dancing crowd, surfing the waves of hands. Wallen became a very popular subject not too long after. The Lakewood Times interviewed him on just the general subject of the dance, so why not take a step into his night?

For Wallen, he did not start off as confident as he may have seemed. He claimed to have been nervous to go and had some serious jitters. But as the night moved on, he became more comfortable. Who would’ve thought getting more comfortable would have taken being thrown into the air about six times? As he got more into the night, his adrenaline was pumping and the party was practically his. His perspective of being up in the air was just people clawing at him. There was also quite a bit of stabbing of nails and fingers but he couldn’t quite feel it. He was taken away by how unexpected it was for people to get so excited about him. Or as he said, “Now I’m the guy?”.

If you, too, were taken away by the music, you might not have noticed him getting yelled at for crowd surfing. Can’t have people getting hurt right? Well apparently, it was a little too late for that. Wallen actually did end up being dropped at one point. The next thing he knew, people were asking him if he was okay but he just got right back up to his toes and yelled. He was unstoppable. Even after they stopped the crowd surfing, Wallen would jump into one of those dance circles and show up and show out.

After Homecoming, Wallen gained quite the attention. New people were saying hi to him in the halls and everyone knows his name through quite a few grades. So, if you want to be in his position, he says to just be yourself and hype everyone around you up. You can’t wait for the people to talk to you; don’t be reserved. Be open. So for all my #DREW fans out there. He’s telling you to be yourself and “Thanks a lot. It’s nice to know more people.”