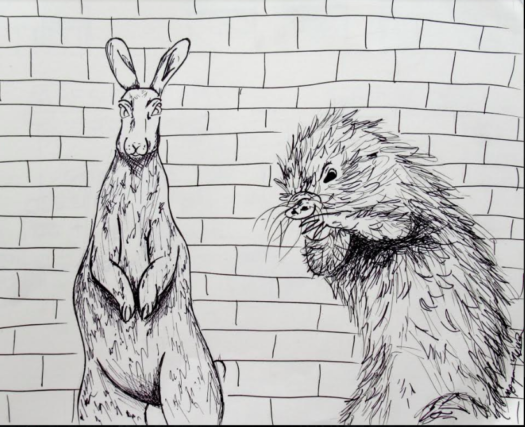 I was walking to the newly opened ice cream shop on W 117th. It was actually quite old but my friend Abe, and his friend Gavin salvaged it, and opened up a new Ice cream shop. It was quite the attraction because well I mean down here in the slums its quite hard to find something that’s edible, much less Ice cream.

It was 2252, and I lived in the slums. The slums are a place filled with all sorts of unfortunate things in this city. These unfortunate creatures is a combination of an ambitious mans dream and a lot of money. Around a hundred years ago, Humans were dying left and right of Cancer, Ebola, and other diseases that killed them off for generations without them actually knowing it.

A group of biologists did a study a figured out that the human population would dwindle down to about half of its current number count back then. At first their leader: Richard Chada, decided to not release this because he believed it would be better just to let “Nature do its work.” There’s a theory that foul play was involved. But a few years later his daughter is diagnosed with Leukemia, so he did his magic and tried to find a cure.

He realised that animals might be the cure to his problems, so he began testing on animals and humans, only the latter had the opportunity to actually choose. Most, if not all the test subjects were horribly ruined. The human counterpart began to take on a lot of the animals beast like traits.

He mostly tested on Mammals, so Reptiles and Bird test subjects are rare to find. After a while he found the cure and was approached by some company to give people Animal genes to “Evolve” the Human race. He was paid pretty to give unborn babies puppy eyes or a lions senses. Unfortunately for him and everyone in the slums he screwed up most of the time and made monsters instead of a new and “Improved” species. The project was eventually abandoned and all his test subjects were forced into the slums. What resulted is us, the hybrids which became the biggest population of people in the slums, humans lived their as well but it was pretty uncommon.

The slums are ruins of the old city and is one the ground level on in the street, everyone now lived in fancy 100 story apartments and got around on flying cars but that doesnt matter. Life in the slums is pretty rough, since its mostly Hybrids with animal like tendencies people here are not very friendly towards each other.

Yet surprisingly being a hybrid is not even the worst thing that could happen, You could become a double. A double is someone who is ⅓ one animal, ⅓ another, and ⅓ human, which is what I am unfortunately. My father was a stag-hybrid and my mother was a wolf hybrid. Since I’m not only a double, I am also a mix between a predator and prey. I am severely hated amongst the hybrids.

I was walking down the street, going to my friends Ice cream place. It was an absolute pain to walk anywhere because my one leg happens to be a Stags while the other is a Wolves. It made it really hard to walk and almost impossible to run, which happens to be the best features of both animals I am. 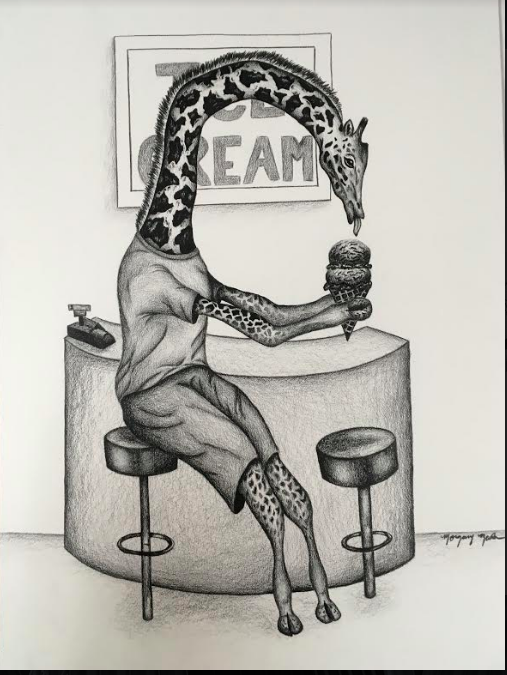 I walked up to the shop and my friend Abe was outside and was being thrown around by Slavers. The slavers were a mix of Predator-hybrids and humans hunting down hybrids for slaves. They are considered todays Animal control. Animal control nowadays is really just hired guns to capture hybrids for slaves, Considering hybrids were not seen as humans, the 13th amendment could not be used to stop it and they were just considered “Pets.”

Abe was mostly giraffe, did not have much human in him. The way it these hybrid genes work is, well they are really just kind of random, Just like most genes. Sometimes it is barley their and some other times it produces a weird deformed monstrosity.

The Slavers unit put Abe in this neck brace thing, it was designed for humans or dogs or something with a smaller neck, but this was obviously too tight, his brace started to rip his neck apart, there was blood everywhere. When they pulled him out of the shop his head slammed against the door frame and the sign above it fell off. They just kept pulling on his neck until they almost pulled his head off, luckily he was able to put his head under the door frame and he didn’t die.

One of the slavers had this big metal rod, he used it to break Abe’s leg with it. He fell to the ground and started to whimper.

After a while they started to notice me “Get out of here you freak!! This has nothing to do with you!!”

I wanted to help Abe but there was not much I could do. “Run Arthur” Ordered Abe, I sometimes forget that is my name, its hard when your constantly called a ‘freak” and an “Abomination.”

I started to run but I kept tripping over my hoof. I eventually tripped over and fell to the ground, part of my Antlers snapped off and one fell into my eye and I couldn’t see out of it. I looked around and I saw silhouettes of the slavers coming towards me. I tried to get up but I kept slipping on my hoof.

They caught up to me and grabbed me by the rest of my antlers “What a disgusting little creature, hmm what should we do with him boys.” His voice was like glass grinding upon a chalkboard. His breath smelled like the rotting tobacco and cheap alcohol.

“Throw him into the pit, the boss has no need for monsters, nobody would buy him.” His voice was even worse, it sounded like a rat with bronchitis.

The dragged me, by the antlers, to the pit. I looked down and it was a hole into the sewer, it reeked of rodents.

“Alright boys, should I break his legs before I toss him down their?” Once I heard that I tried to break free, I hit him in the stomach with my Antlers.

“You goddamn Mongoloid” He threw me down their. He started to shoot at me but somehow I dodged all of his bullets.

The Pit was a strange place, I’ve heard stories about this place, none of which were good. It smelled like old moldy cheese and decay. I honestly wish I was back at the surface with the animal control.

The Pit used to be where all the humans would put all of their trash and waste but now they just vaporize it into the air. All of this waste was around 125 years old when the humans moved up into the sky. Also around when the first Hybrids were made.

Two figures in the dark came up to me, they were hybrids and terrifying ones at that. One was a white rabbit-hybrid with bright red eyes. It was massive, had to be at least 7ft tall. He also had muscles comparable to norse gods. He obviously could not speak and the other one couldn’t do the speaking as well.

The other one was equally as terrifying, it was a porcupine-Hybrid. He was a lot shorter maybe 5ft but he had these dark eyes. He made this terrifying shrieking sound that felt like glass against your ears.

The rabbit grabbed me while the porcupine hissed at me and cut me up with his needle like hands.

“Stop, tst tst tst tst tst tst tst” Another figure came out of the dark. Had to be at most 3 ft tall but he was the most terrifying. He actually looked the most human, But I couldn’t exactly put my finger on what he was supposed to be. He had a long nose with a mole on it and disgusting buck teeth but he looked human almost.

“Seamus, Bill, how idiotic are you?” Both of them let me go and backed off. “We are supposed to let doubles live” He turned towards me “I am sorry their idiots, my name is Judas, yours?”

“Well today is your lucky day, Arthur. You get to meet our leader: Brian Caesar” I almost laughed for a second. I mean you got one of the most basic names of the beginning of the millennia, and then you had Caesar, probably one of the most important houses in roman history.

“Tell me about Caesar.”

“Well, tst tst tst, he is the king, of sorts, of the Pit. Any rodents are taken under his wing into the ‘Glires.” I have heard of the Glires before, they are sort of the gang (If there was one) of this city. They are made up of rodents, which they are almost as hated as doubles, and they terrorize the surface. They do this mainly because they hate the fact that most hybrids hate them.

“Look Boy! You are a double and will go nowhere in life, at least in the legal sense. Cesar can give you freedom and a family.”

“So you guys accept doubles now?”

“Well take me to him then.”

We walked to their hideout, it was a big hall with a huge fire coming out of a trash can in the middle. Their was christmas lights on the ceiling. At the end of the hall their was a Raccoon-Hybrid sitting in a chair atop a pile of trash. 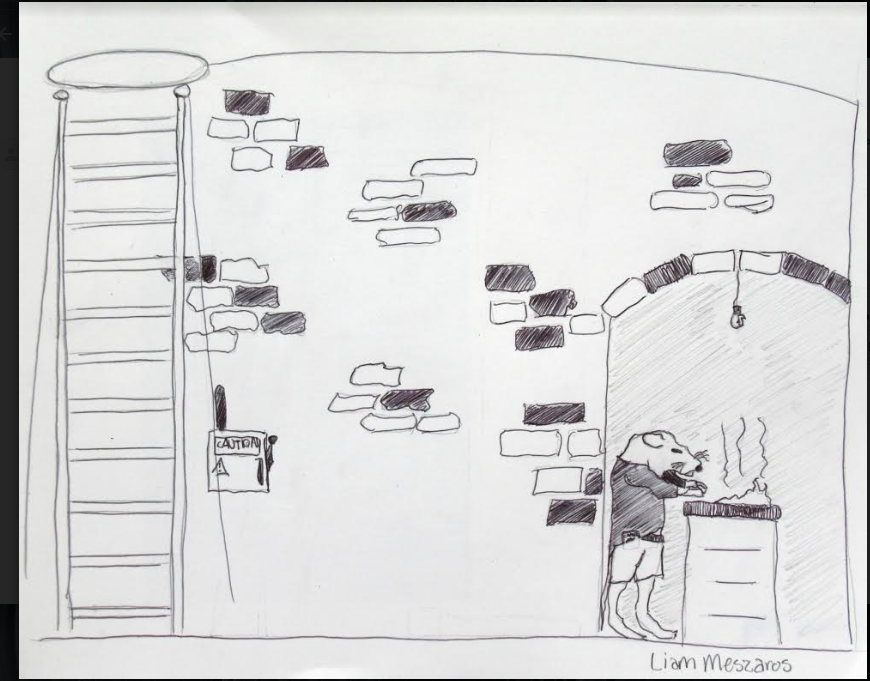 There was two Squirrel-Hybrids dragging a human towards the throne.

“Speak” ordered the Raccoon. I was guessing he was Caesar, he definitely spoke like a true Roman general.

“Look I was only trying to help you, I think what we are doing to you is wrong” Said the human. He looked very distraught about the whole thing, I would not blame him.

“We do not need your charity, Human. We are better than you, I hope you understanding.”

“Throw him into the brackish water, let him know what it’s really like to be a Hybrid.”

“No, please, you freaks ahh get off me!!!” They dragged him away.

“And who might you be?” he asked me in a very commanding tone. I was speechless after that performance I just saw “SPEAK BOY!!” he shouted.

“Your just Arthur? Nothing else about you I should know?”

“You guess? You look uglier than old Judas over their” That hurt to be compared to a Rat. “Relax my boy, I was only joking. You look young and healthy, how old are you?”

“My my, you are young. How long do deers-hybrids or wolf-hybrids usually live up too?”

“Well your young enough to join, would you like to?”

“Yes sir”. I really did not want too, I was frankly terrified of the whole situation, but at the same time I lived of the streets and I did not want to become a slave as well.

“So eager, very well. Seamus!!!” The Rabbit walked over here. He pulled out a small knife and grabbed my arm and dragged me over to the fire.

“What do you want me to do sir?” I felt like an idiot.

“Grab the knife” I grabbed it, frightened of what I was supposed to do.

“Cut your hand, or paw, over the fire.” The knife was rusty and had crusted blood all over it. I was afraid to get an infection but I was also afraid to piss these guys off. Plus they were right I don’t have a family.

“Here goes nothing.” I cut my paw open and it stung like a bee.

“Congratulations my Boy, your one of us now.”

It felt nice, for the first time ever I had a family. 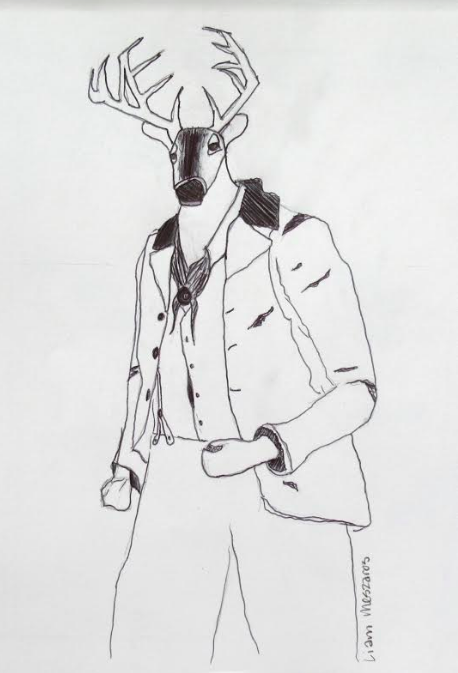