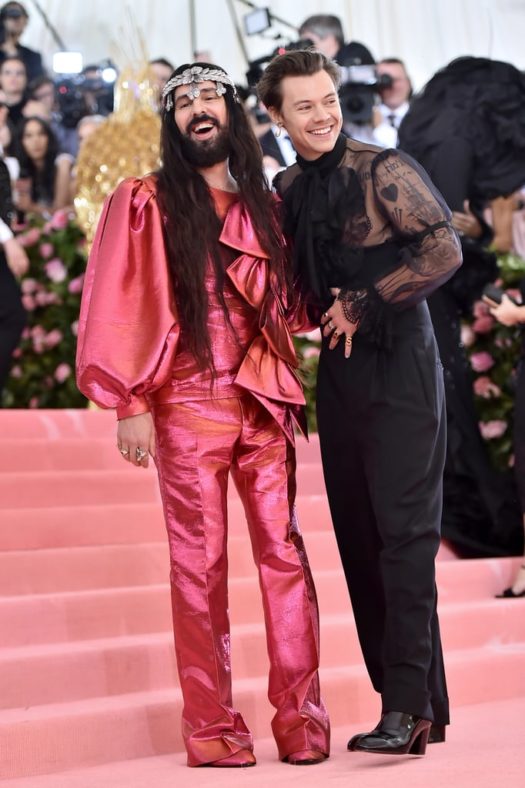 The 71st annual Met Gala took place on Monday 6th, 2019. The theme for this years gala was “Camp: Notes on Fashion”, inspired by Susan Sontag’s 1964 essay. In Sontag’s iconic essay, she defines camp as “love of the unnatural: of artifice and exaggeration.” Camp fashion is often vulgar, ironic, absurd, and often times androgynous.

Many celebrities and their stylists pulled out iconic outfits for the night. Met Gala co-chair, Lady Gaga had four separate outfits on the pink carpet while wheeling around a pink champagne wagon–setting the bar high for the theme of Camp. Actor Billy Porter wore a golden catsuit and was carried out on a gold-trimmed litter by six shirtless men in gold pants, the iconic outfit was a great demonstration of performance camp.

Other guests decided to show up in plain black suits. Rami Malek and Taron Egerton–who played Freddie Mercury and Elton John–wore simple black suits, not sticking to the theme.

Met Gala co-chair Harry Styles is seen in a high-waisted, feminine jumpsuit with painted nails, one earring, and high-heeled boots. He walked the pink carpet with the creative director of Gucci, Met Gala co-chair Alessandro Michele. Zendaya was also a hit of the evening, dressing as Cinderella. Committed to the role, she even left one glass slipper of the Met staircase as she left the carpet.

The Met Gala is a highly talked about event, with many fashion critics and everyday people judging each look harshly. Lakewood High School student Alex Bransteter says, “All the outfits really showed how creative people be.”

This year’s Met Gala is just another example of fashion’s influential looks showcased on an iconic day.