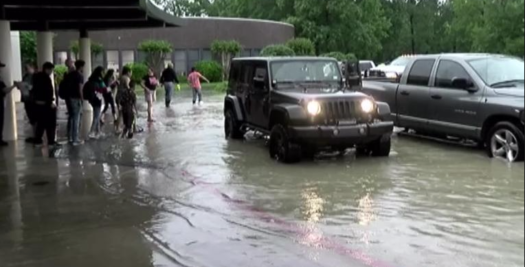 ▲
Kids waitings to get picked up after staying a school overnight
CNN.10

▲
Kids waitings to get picked up after staying a school overnight
CNN.10

60 students stranded at a Texas elementary school overnight after heavy rain and flooding. A downpour of rain kept buses and parents of the road in Cleveland, Texas that caused South Side Elementary school to keep the student there.

”  I can only imagine how terrible it would be to be stuck at school overnight.  I don’t like going there for seven hours a day let alone overnight.  I also wonder if the school had enough food to feed the 60 kids that were stuck there.” Lucas Winters

More than 100 different staff members stayed at the school taking shifts sleeping making sure that the students were ok and nothing else went wrong.  A nearby church in Cleveland, Texas sent money over to make sure the students stayed safe.

Most of the students who were elementary age stayed busy by playing cars and watching Television.  The whole district was off of school on that Wednesday because of the intense raining.

The raining is expected to continue downing Texas so now there are more than 30 million people in the path of the severe storm on Wednesday.  The rain will be more focused on South East Texas, Louisiana, and Arkansas.  By Sunday much more of that same region will be hit with an extended 3-6 inches of rain.

In Austin, Texas there was a rumor going around that a person got swept away in the swiftly moving water on Wednesday.  Later that day a 50-year-old man’s body was found in a nearby lake named Lady Bird Lake.