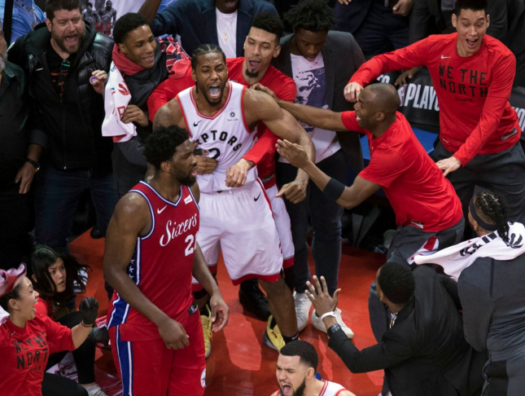 On Sunday the Philadelphia 76ers and Toronto Raptors squared off in a Game 7 to decide who will play the Bucks in the Eastern Conference Finals. Both teams started off very slow on the  offensive end as the 76ers missed their first nine and shots and Toronto was only shooting 3/12 from the field. After the first quarter the score was 18-13 and it seemed like the theme of this game was going to be defense.

In the second quarter, the stars started to shine on both teams as Kawhi was heating up for the Raptors and Embiid was starting to see shots fall in as well. Ultimately, when the score was locked up at 85 with 1;50 remaining, you knew we were going to have a legendary finish.

With 4.2 seconds left and the game tied, Kawhi sent the 76ers home with a historic buzzer beater over Joel Embiid. Leonard’s buzzer-beater was his 39th field-goal attempt of the game and hung on the rim for what seemed like an eternity before it fell through. He finished with 41 points and averaged 34.7 a night in the series win over the Sixers.

Senior Wilson Reynolds said, “I was sad when the 76ers lost because JJ Redick is my cousin.”

The Raptors will surely need more of a balanced effort against a Milwaukee Bucks team that led the league in defensive rating during the regular season.

They traded for Leonard for these exact moments, and he delivered in historic fashion.