Most Stressed City in Ohio 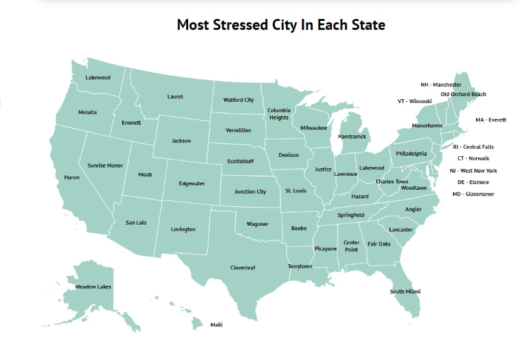 ▲
Most stressed city of each state
Zippia

▲
Most stressed city of each state
Zippia

Lakewood, Ohio has a population of 50,778. It is a small city next to Cleveland that is 6.69 miles squared. It is the third largest city in Cuyahoga County.

Lakewood has many things to offer such as Lake Erie, one of the Great Lakes. There is also so much diversity and the neighbors and neighborhood all seem to be close and have block parties every year in the summer. It also has two community pools and many parks.

Lakewood also holds many ‘get together’ things like Light Up Lakewood and the Fourth of July events and art festivals and so much more.

The study was based on unemployment, the amount of hours worked, the time it takes to get places, the population, the price of housing compared to income, and the population of people who are uninsured.

They collected all of their information on data from the U.S. Census American Community Survey for 2013-2017 and Bureau of Labor Statistics.

Lakewood has an unemployment rate of 3.06% (Civicdashboards). The amount of people that are sixteen years and older that does work is about 29,133 according to city town info.

The average commute time form Lakewood to work is about 24.3 minutes.

All of this making Lakewood the most stressed city in Ohio.