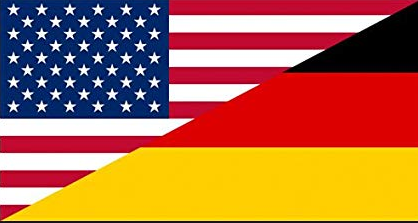 ▲
Its a Flag
American Vinyl

▲
Its a Flag
American Vinyl

To come to the United States as a German exchange student is quite exciting because pretty much everything is different.

The first thing I noticed is that the security at the airports is more strict than in Germany. The time in the United States works differently too. In Germany we don’t have AM and PM; we use what the Americans call “Military Time.”

When I first went to a grocery store, I was pretty impressed by how big everything is — not just the store itself but just everything you can buy is larger and much cheaper.

The most important difference for me is the school system.

In Germany, we don’t have as many courses, so we can’t choose what we want to do during the school year. It’s similar to the Middle school system except we have more subjects.

In Germany you have 10 years of school and then you can graduate, but if you want to go to a university, you have to do extra 2-3 years to get your A-Levels.

Normally you start school at 5 or 6 years old after you went to the Kindergarten for 2 years.

Personally I think that I like the American school system better, but I think that overall you learn more with the German system.

At first I struggled a bit with the system here, but now I’m feeling very confident.