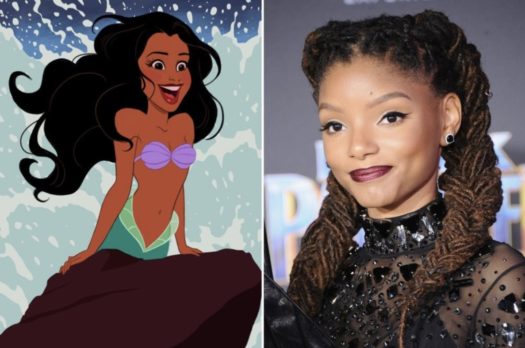 Currently Disney is on a bit of a roll with remaking all of their classics like The Lion King, Lady and the Tramp, and Cinderella, so it is only right to add The Little Mermaid to that list. The Little Mermaid is about a mermaid princess named Ariel who trades her amazing voice for legs just to hang out with some unseasoned human prince named Eric.

Now with remaking a classic like this you must have the right people to take on such iconic roles. So who better to take on the role of Ariel other than R&B singer and actress Halle Bailey? The role marks Bailey’s feature film debut, following the formation of her music group Chloe x Halle with her sister Chloe in 2015. She also stars in the Freeform series “Grown-ish” as stated by variety.com. Many don’t agree with Bailey getting the role of Ariel because she is a black women. Some people even went as far as creating the hashtags #NotMyAriel and #NotMyMermaid to show their distaste towards the actress. I asked Meya Omotosho what she thinks of having a black girl play the new Little Mermaid and she said, “I love that they have decided to make Ariel a black girl because so many little girls can see themselves in her when they watch the movie”.

Some people are stirring controversy by inquiring why a black actress was chosen for the role rather than someone who matched the Ariel of the 1989 cartoon. Just to simplify what I previously said, people are mad that a talented black girl got the role instead of a white girl. Some try to make the argument that if Ariel (a mermaid, a whole entire mythological creature) can be black then princess Tiana from The Princess and the Frog can be a white girl. But that cannot happen because princess Tiana’s whole story is about her being a black woman in a time when no one wanted to see a black woman win. And Ariel’s story, well, I have already explained it…she is just a mermaid and what she looks like does not matter and it does not change or affect her story in any way.