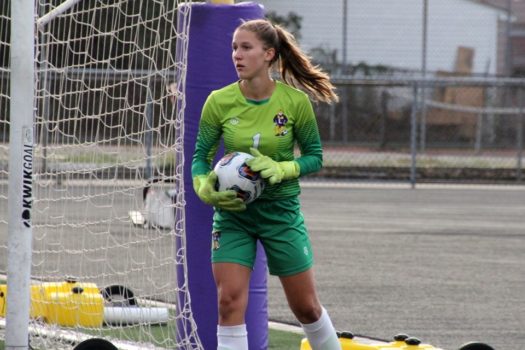 Only a freshman playing as a varsity goalie, Lauren Barber is dominating in LHS Girls Soccer. She has made five shutouts this season and as many as 20 saves during the first half of a game.

This sensational athlete has been shining on the soccer field for nine years, and been a goalie for five years.

Lauren was interviewed about life as a soccer player at LHS.

When asked what a typical practice is like and how often the soccer team trains, Lauren responded:

“A typical practice depends on the day and the team we are playing next. It depends on the number of games we have a week, but our practices are usually one and a half hours to two hours long.”

Most people have an idol or someone who inspires them. Lauren was also asked if there were any athletes that inspire her and why.

“My favorite athlete in soccer is Alyssa Naeher but outside of soccer, my favorite is Francisco Lindor. Alyssa Naeher is the USA women’s goalie and she really inspires me as a goalie. I think that watching her performance in goal can help me improve.”

In anything, whether it is a job interview or a playing on a sports team, people have superstitions. These could be eating the same thing for breakfast, wearing the same socks, or anything else in order to gain good luck. Lauren was asked if she had any pregame rituals or superstitions.

“A pregame ritual that I have is my defenders and I have a little fist bump we do.”

One of the biggest parts of playing a sport is being on a team and being connected to your teammates. Lauren shared what her favorite part of being on the LHS soccer team is.

“My favorite part about being on the soccer team is bonding with all the girls and being able to represent Lakewood.”

Although she has no plans involving soccer, there is no limit to what this varsity goalie can achieve, whether it is on the soccer field or in a classroom. She is headed for success!