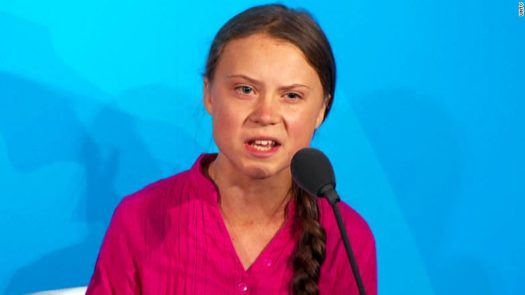 Emerged as the face of climate change activism, Greta Thunberg is using her voice to hold real accountability on the government for failing our future and world. Thunberg is a 16-year-old girl from Sweden living with Aspergers, and she is taking the world by storm.

Over the past year, she has made such a ripple effect in the climate-change world. Launching a youth movement, “Fridays for Future” or “School Strike for Climate.” The strike encouraging students to get involved in the fight to save our planet by skipping school and demanding change.

On Friday, September 20th, she was joined in protest by an estimated 4 million people coming together across 161 countries.

Students are all required to attend school, but with the deterioration of climate destruction, what’s the point? Why must students study and educate themselves for a future if there might not be one? Thunberg is not encouraging the youth to skip school, but to get informed and make a rumple!

In recent news, Greta sailed to New York for the UN Climate Action Summit, where she delivered an emotional, yet very powerful speech. She held the audience at the edge of their seats with her passionate words, of upbraiding political leaders for only talking of “money and fairy tales of eternal economic growth” all while “people are dying and ecosystems are collapsing.”

“You are failing us. But young people are starting to understand your betrayal. The eyes of all future generations are upon you,” she said with tears in her eyes. “Right here, right now is where we draw the line. The world is waking up. And change is coming, whether you like it or not.”

When asking a LHS student about how we can use Thunberg’s influence to start our own fight for change, Jordan”The Tree” Rossen had to say:

“She shows us that even the smallest people can make the biggest change, so we must take it into our hands. Simple changes like consisitently recycling, walking to school, packing a lunch with resuable tupperwear, or starting a club to inform the public about climate issues can make a change for the better.”

Greta Thunberg is a great influence to the young people of today. We have one world, one life, and only 8.5 years to fix it before the damage to it is irreversible. So get off your butt and use your voice and your platform to scream for the people who can’t!