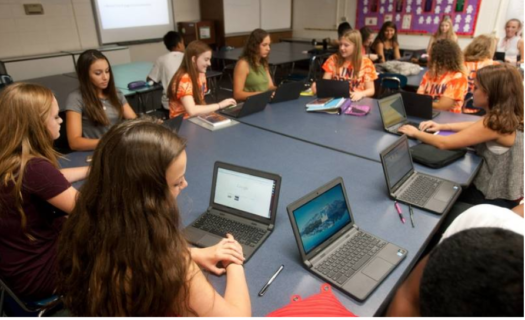 When I heard that I WAS going to get a Chromebook here, I was excited because, in my school in Germany, we don’t get  own Chromebooks we can work with. We just have  a room with computers in it, but we barely use it.

When the school year began, I had to wait 2 more weeks to get my Chromebook, because I’m a new student.

Unfortunately, I had to give it back just one day later because it was broken. When I got it back a day later, I could use it for 2 whole days and then it died again. So I brought it back again so it could get repaired. Hopefully that was the last time I had to bring it back and it’s working fine now.

I don’t actually use my Chromebook that often.

But it’s still useful to me because I can do my online homework while I’m in school or play some snake during my algebra class. I think for some classes a Chromebook is kinda necessary because some teachers really got used to it so they use them very often or only during their classes.

To get used to the Chromebook and online stuff like Progressbook was a bit hard at the start, but after I had my Chromebook for a week, I already got used to it.

I’m not looking forward to not having this technology when I’m back in Germany in my school where we barely use that kind of technology during a normal school day.

So, to answer the question if Chromebooks really help?